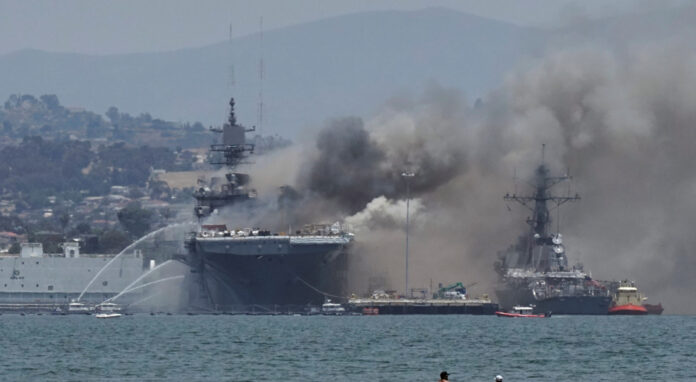 Brigadier General Esmail Qa’ani made the comments in reaction to a massive fire raging for days now aboard the US Navy warship USS Bon Homme Richard which is docked at a San Diego base.

“What has happened in the United States now, especially the warship incident, is the result of the US government’s action, behaviour and crimes,” said General Qa’ani, the commander of the Quds Force of Iran’s Islamic Revolution Guards Corps (IRGC).

“It is divine promise that anyone who commits oppression and crime will meet divine retribution,” he added.

“They should not look for a culprit and accuse others,” he noted.

“This is the fire that they themselves have lit, and the same fire has engulfed them today,” he added.

“We should tell them that this incident (the warship fire) is a response to their crimes,” he noted.

“This incident was caused by your own elements, and God Almighty punishes you with your own hands,” he added.

“You are still having your good days. Very difficult days and tough incidents are ahead of you and the Zionist regime [of Israel],” he said.

“The reality is that the US military is weary and worn-out, and its equipment has turned into scrap metal,” the top general said.

“It’s been a long time and US Navy commanders have been saying that these warships are merely scrap metal. The US should admit what situation it is in, and should stop oppressing humanity and its own people,” he said.