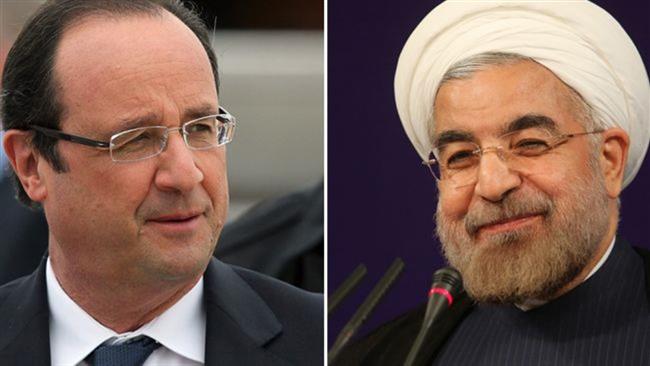 Iranian President Hassan Rouhani says time is ripe for Tehran and Paris to bolster their cooperation in different fields especially in the area of fighting terrorism in the region.

Rouhani made the remarks in a telephone conversation with his French counterpart, Francois Hollande, on Thursday, underscoring the enormous potential that Iran and France have for expanding cooperation in different fields.

“Over the past 10 years, the two countries have lost many opportunities to deepen and expand relations, and now is the time to redress the past,” Rouhani said.

The phone conversation came over a week after Iran and the P5+1 group of countries – the United States, Britain, China, France, Russia and Germany – succeeded in finalizing the text of the Joint Comprehensive Plan of Action (JCPOA) in the Austrian capital, Vienna, on July 14.

Rouhani further described the commitment of all sides to fulfilling their obligations as the most important factor for the success of the executive process of the negotiations, adding, “It is necessary for the members of the P5+1 group to try to take the next steps of the nuclear agreement.”

Referring to the situation in the Middle East and the destruction terrorist groups are wreaking on the region, Rouhani said Iran seeks the cooperation of the European countries, including France, to counter terrorist groups in Syria, Iraq and Yemen.

“The establishment of peace and stability in the region is Iran’s main objective, and we are ready to cooperate with other countries, including France, in this regard,” Iran’s president added.

Rouhani further referred to the deplorable situation of the Yemeni people, who have been under relentless Saudi aggression since late March, saying, “Airstrikes by a neighboring country against the Yemeni people are unacceptable and I hope that the massacre of Yemeni people is condemned by France and the European Union.”

Rupert Colville, the spokesman for the United Nations High Commissioner for Human Rights, said on July 21 that at least 1,693 civilians had been killed and 3,829 others injured since 26 March in Yemen. However, local sources say over 4,500 people have lost their lives in the Saudi onslaught.

The French president, for his part, appreciated efforts by President Rouhani during the nuclear talks between Iran and its negotiating partners, saying French Foreign Minister Laurent Fabius will soon visit Iran to strengthen bilateral relations.

Hollande also stated that all parties to the nuclear agreement should work for its implementation, and that Paris is ready to expand its ties with Iran in the fields of energy, oil, and air transportation.

Hollande said his country is ready to cooperate with Iran in the fight against terrorism, stressing that a political solution should be sought to end the violence in Yemen and Syria.

The French president added that his country is ready to cooperate in the fight against terrorism and ISLI Takfiri group in Iraq.