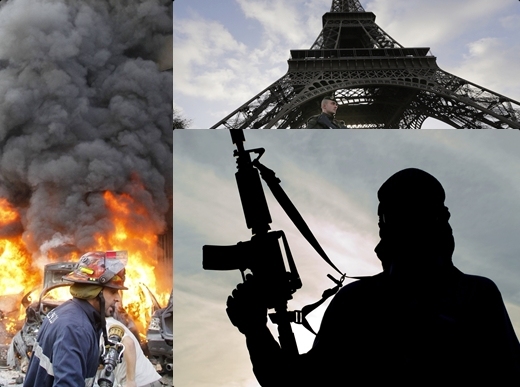 In less than a week, ISIS targeted different places in the world, leaving a path of death and destruction in its wake. The way media around the world covered the terror attacks in Baghdad, Beirut and Paris raises a couple of questions: Why the global media ignored the Beirut bombings? Are media to blame for the disproportionate focus on the Paris attacks over Beirut’s?

Alef.ir on November 16 published a piece by Amir-Mohammad Fatemi on the extensive media coverage of Paris attacks and why nobody paused to listen to the voice of the victims of terror attacks in Beirut and Baghdad. The following is the translation of part of that piece:

1. Thursday November 12: A predominantly Shiite suburb of Beirut was rocked by twin bombings which left up to 300 people killed or injured.

Friday November 13: A bomb went off in a funeral procession for a Shiite fighter who was killed in the fight against ISIS, killing and injuring more than 95 people.

Late Friday November 13: Paris was hit by multiple attacks [claimed] by ISIS following the Beirut and Baghdad bombings. Up to 360 people were killed or injured in the terror attacks.

Western, Arab, world and even Iranian media reacted differently this time around and – unlike what they did in reaction to the twin bombings which were carried out hours apart in two different places by the same terror group – gave extensive coverage to the Paris attacks describing them as being similar to 9/11 attacks on the US in 2001.

2. On any grounds, Iranian media have – perhaps unwittingly or just because they were seeking to follow the news and analyses produced by the Western and non-Western media outlets – covered the Paris attacks and their aftermath over the past few days, ignoring the Beirut and Baghdad bombings. […] On Sunday the world media did not run one news analysis or even one single headline on the terror attacks in Beirut and Baghdad. […]

3. A study of more than 2,000 front pages of newspapers and websites which covered the 33-day war [the 2006 Israel-Hezbollah War] between Hezbollah and the invading, armed-to-the-teeth army of the Zionist regime suggests that less than five percent of these media outlets dealt with the 33-day war.

It also reveals that three percent – out of the overall five percent – of the news items was aimed at defending the innocence of the Zionist regime’s military, and the remaining two percent covered the battle itself. In other words, no media organization released news materials to defend the rightfulness, legitimacy and innocence of the country which came under attack. […]

4.  Officials of the United Nations, all Western states, and other countries – including Iran – have expressed regret over the Paris attacks and sympathized with the French government and people over the past few days, like what was done when 9/11 attacks were mounted.

It is interesting that no government – but Iran’s – expressed sorrow or cabled a message [of condolence] over bomb attacks in Beirut and Baghdad against the innocent Shiite people. It seems as if those who were killed in Beirut and Baghdad were different from the dead in the Paris attacks!

Perhaps people in Iraq and Lebanon, Shiites included, are believed to deserve to suffer through bomb attacks, killings and pillage at the hands of ISIS terrorists! Perhaps we have to admit that we are treated as second class in the world classifications when it comes to being killed or injured!

Maybe it is for the same reason that US Secretary of State John Kerry openly blamed – in a press conference on Saturday – Bashar Assad’s policies for ISIS terrorist activities in Syria. In response to remarks by his Russian counterpart Sergei Lavrov that France’s behavior may have probably triggered terrorist attacks in Paris, Kerry remained silent.

When Lavrov said with subtlety that all [people and nations], either for or against Bashar Assad, are targeted by ISIS terrorist attacks, Kerry remained silent again. [Kerry suggested radicals were drawn to the country in their fight against Assad, a view Lavrov disputed. … Kerry said the war “can’t end as long as Bashar Assad is there. That’s the perception of the people waging the war.” But Lavrov said the conflict — or its solution — is “not about Assad.” “It doesn’t matter if you are for Assad or against him,” he said. “ISIS is your enemy.” (AP- November 14)].

Without any partisan or factional bias, the following question – which is one of the main national and religious concerns – needs to be thought over: why was it that terrorist attacks against the Shiites in Beirut and Baghdad were overshadowed by the Paris attacks in Iran’s media, both privately-run websites and the national broadcaster, IRIB?

5. The Mina tragedy in which a number of Iranians went missing is still an open case, at least for Iran. What unfolded in Saudi Arabia [during the Hajj rituals] did not land in the spotlight thanks to a [virtually] blanket media blackout imposed by the Western and Arab countries […].

6. Why they [the Western and Arab countries] treat us [Iranians] and anything which has something to do with us in this manner [ignoring what happens] is not the focus here in this article. But it is of great significance to ponder on one point: why do we treat our own issues in such a manner, both from social and media angles?

Following the 9/11 attacks, I said – in a letter in response to remarks by a certain country’s officials who blamed Iran for not expressing sympathy with the American people [for the terrorist attacks] – that we shed tears for the dead people in a country that has cried for our dead in Iran, and that we voice regret for the losses of those who have expressed regret over the sufferings we have endured.

That’s why the Iranian media should think thoroughly about the reason why they brought into focus the Paris attacks and expressed regret [over the attacks] and sympathy [with France], but they looked the other way or did not give full coverage to the bomb attacks and pains in Beirut and Baghdad? […]