The world needs to know that extremism cannot be treated arbitrarily 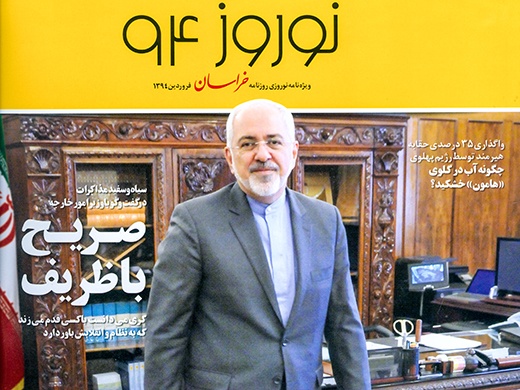 Iran’s foreign minister has said in an interview that the West has to accept the fact that Iran is after interaction, dialogue and logic.

Foreign Minister Mohammad Javad Zarif has said that the world should wake up to the fact that extremism has to be seriously dealt with.

In its New Year supplement, Khorasan daily published an interview with the Iranian top diplomat on different issues, including talks with P5+1 and Iran’s ties with neighboring countries. The following is a partial translation of the highlights of Mr. Zarif’s remarks:

In the past the West assumed or acted as if Iran’s enrichment program was geared toward making a bomb. Although those allegations are still repeated, now experts with the International Atomic Energy Agency and Western political, technical and scientific circles acknowledge that there is a technical way to make sure enrichment does not lead to development of nuclear weapons. This is an achievement and now it is up to the other side to carry the ball and display political will.

In recent years, Iran has had the greatest cooperation with the IAEA. Perhaps nowhere else in the world – Japan excluded – has the IAEA been that much active; this comes as Iran has only 17 atomic sites and Japan is home to 170 nuclear facilities.

If you take a look at the agency’s 2013 report, you will learn that Iran’s reported negligence equals that of Japan which is below one percent. In the case of some countries that figure is as high as 20 or 30 percent. There are a couple of cases where the negligence figure is 100 percent. […]

I believe we can hold talks with the US and produce the [intended] results from such talks.

If we fail to arrive at an agreement, the US miscalculation would be to blame; the Americans [wrongly] thought that they could pursue their agenda though piling pressure [on Iran]. There is still one good opportunity to reach a deal, one which allows Iran to hold on to its rights and maintain its interests.

[…] I have repeatedly said that we do not hold talks only with the US. There are two reasons why negotiations with the US have been highlighted: First, it is the first time the Islamic Republic of Iran has entered official talks with the US; second and more importantly, the nuclear issue is the only subject about which we hold talks with the US.

If the talks result in a breakthrough, it won’t mean that all problems have been removed. From the start, I told my colleagues at the Foreign Ministry that conclusion of the Geneva deal marked the beginning of our job and that it would increase the problems and challenges down the road. In case talks break down, we have made other arrangements.

Mr. Obama said in a speech in [the Brookings Institution’s annual] Saban [Forum in December], ‘If I had an option, if we could create an option in which Iran eliminated every single nut and bolt of their nuclear program, and foreswore the possibility of ever having a nuclear program, and, for that matter, got rid of all its military capabilities, I would take it. But that particular option is not available.’

His remarks [back then] were viewed as an affront to Iran. They could have been viewed as inevitability, on the US part, to get along with the Iranian people. This is how I read Mr. Obama’s remarks, although I am not under any illusion that the US has changed course.

I’m sure that when [Secretary John] Kerry was taking a walk [in Geneva] with me, he felt that he was talking with a man who had strong belief in his country’s establishment and revolution. During the talks I repeatedly went to a corner in the negotiating room to say my prayers and later said [to the other parties to the talks] that I said my prayers to remember that there is one superior power in the world and other powers are not as mighty as Him.

I do not think that the American or other delegations could find any moment in the talks in which my colleagues or I have dropped our revolutionary principles and beliefs. In addition, the other side is convinced that Iran is after interaction, dialogue and logic to stick to its rights. Iran is not after war, conflict or tension, but we will stand up to bullying.

I hope the world will come to its senses next year [Iranian New Year that starts on March 21] to confront extremism and realize that acts of extremism cannot be treated selectively.

[…] I am certain that the West, including the US, has no option but arrive at a deal with Iran which is based on dialogue and mutual respect. They may make mistakes. Even in that case, I hope the Iranian people are not affected by their possible mistakes.