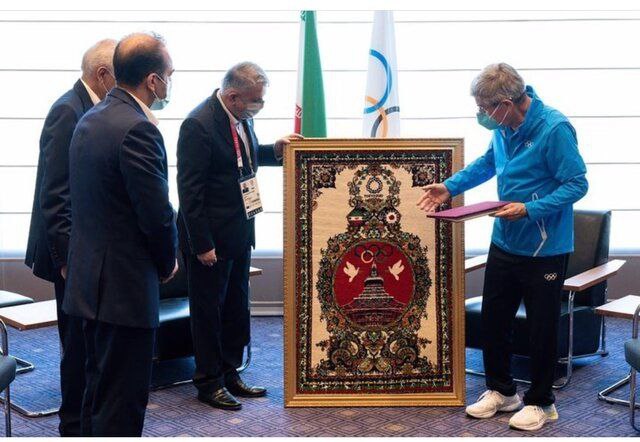 A few days ago, an Iranian artist unveiled an Olympics-themed framed rug in Tokyo, where the 2020 Olympics is underway.

The designer and creator of the hand-woven carpet is Hossein Kazemi Hamed, an Iranian artist who has also prepared framed rugs for the FIFA World Cup, the AFC Asian Cup and other major sports events in the past.

Kazemi now says he has been designing and weaving carpets for major sports events to make other countries familiar with the Iranian art.

“When, for the first time, I started a sports-themed framed rug project [for the FIFA World Cup] in 1998 in France, with the aim of introducing Iranian art and culture [to other countries], it got huge attention from domestic and foreign media,” Kazemi said in an interview with Iran’s ISNA news agency.

“Before that, no one had ever linked carpets with sports. In fact, this was my own idea and initiative and a result of my own creativity. Also in the year 2002, when the FIFA World cup was held in South Korea and Japan, with the help of Mr. Adel Gharibi, I cooperated with a Japanese company and he has provided for all the costs of these carpets ever since, and also for the one woven for the 2020 Tokyo Olympics.”

The Iranian artist also touched on the elements he has used in the Olympics-themed carpet and their meaning.