Terrorists have no mercy for anyone: President Rouhani 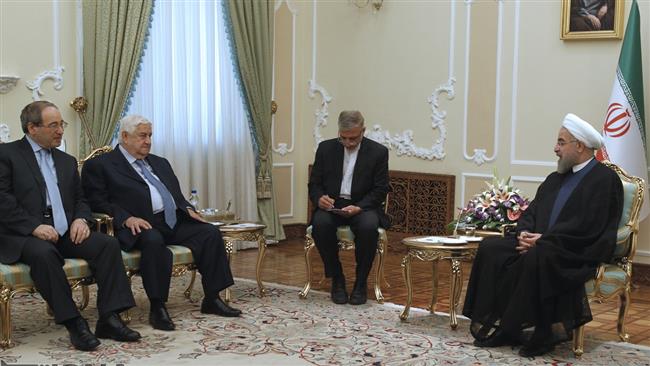 President Rouhani has said that no doubt terrorists will eventually suffer defeat and will be driven out of the region.

Iranian President has called on all world countries to engage in the fight against the common threat of terrorism, stressing that the terror groups will “show no mercy” to anyone.

In a meeting with visiting Syrian Foreign Minister Walid al-Muallem in Tehran on Wednesday, Rouhani emphasized the need for all countries and governments to regard the anti-terror battle as a duty.

The Iranian president warned of the growing wave of terrorism as a “universal” threat, adding that “terrorists will have no mercy for anyone or anything.”

Rouhani further reaffirmed Iran’s unwavering support for the Syrian nation in the face of Takfiri terror groups and said, “Backing oppressed nations and friendly governments as well as making efforts for the establishment of peace and security in the region are among the Islamic Republic’s unchangeable goals and principles.”

The Iranian chief executive rejected any military solution to the crisis in Syria, saying Iran will do everything in its power on the political scene to help end the violence, which has so far claimed over 230,000 lives, and restore calm to the Arab country.

“We have no doubt that terrorists will eventually suffer defeat and will be driven out of the region,” Rouhani added.

Muallem, in turn, thanked the Islamic Republic for standing by the Syrian nation over the past four years, outlining the latest developments in Syria’s political arena as well as on the battlefield against the foreign-backed terrorists.

The top Syrian diplomat also hailed the outcome in the nuclear negotiations over Iran’s nuclear program, saying the breakthrough could play a positive role in regional developments.