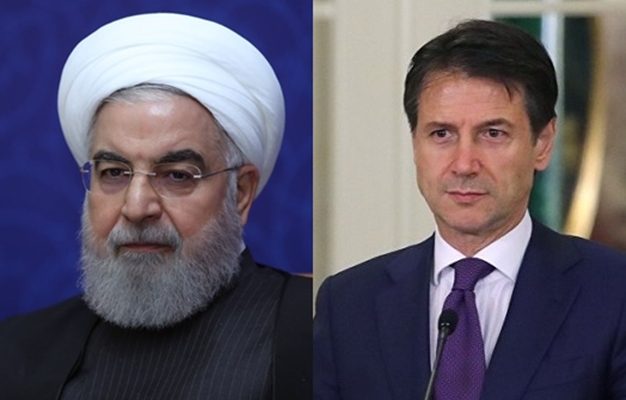 President Hassan Rouhani says Iran expects European countries, especially Italy, to take action against the US inhumane measures and its violation of international rules in the current difficult circumstances.

Speaking in a Monday phone call with Italian Prime Minister Giuseppe Conte, President Rouhani said protecting the lives of human beings is more important than anything else.

However, he noted, in the current difficult circumstances the US pressure on the Iranian people is more inhumane than ever.

He stated the continuation of this pressure is a brutal crime against a great nation and against all human principles and international regulations.

Stressing that countries will not be able to overcome this difficult crisis without each other’s help, he said, “By working together and sharing experiences, we can control this virus.”

Rouhani also expressed sympathy with the Italian people over the coronavirus, underscoring that Iranian knowledge-based companies have made good progress to combat the virus. “Tehran is ready to cooperate with Rome by sharing its experience in controlling the disease.”

Referring to Italy’s position on the 2015 nuclear deal and its support for the international agreement, Rouhani stressed, “We are ready to completely fulfil our commitments under the JCPOA if the other party complies with all its obligations and refrains from threatening.”

“Italy has always played an important role in our foreign policy, and I hope it will call on the European Union to fully implement the JCPOA,” the Iranian president added.
“Unfortunately, the financial mechanism designed by Europe (INSTEX) has not yet been able to take a significant and effective step and play a role.”

Pointing to the US opposition to the International Monetary Fund’s granting of a loan to Iran, Rouhani said, “Today, political issues should not be raised as in the past, and human issues and saving human lives should be given priority.”

“At this point, it is clear that the fate of the international community is completely interdependent, and I hope that Europe, and especially Italy, will be able to take an action that benefits all nations in this critical context.”

Elsewhere in his statements, Iran’s president talked about the importance of ensuring security and stability in the region, underlining that “According to the Hormuz Peace Initiative (HOPE), stability and security of the region will be achieved only through cooperation between the countries of this region.”

The intervention of foreigners, especially the US whose name is associated with crime and jeopardy, threatens the peace of the region, underpinned Rouhani.

For his part, the Italian Prime Minister expressed sympathy with the government and people of Iran over the COVID-19 outbreak, saying the Islamic Republic’s problems are well understood by Italy because the two countries are both involved in the same problem.

He also noted that Rome welcomes the exchange of joint experiences of the two countries against the coronavirus.

Conte also touched upon expanding and deepening of bilateral relations, saying “We are ready to cooperate with Iran regarding the JCPOA and the strengthening of the EU’s financial mechanism as well as the serious participation of countries in this plan.”

“We are also trying to work together with European countries and member states at the G7 and G20 to take effective actions.”

The Italian Prime Minister also stressed Iran’s constructive role in establishing peace and stability in the region and countering terrorism, reiterating that “every opportunity should be seized to resolve issues and ensure security in the region, and we will always emphasise Iran’s significant role in this matter.”