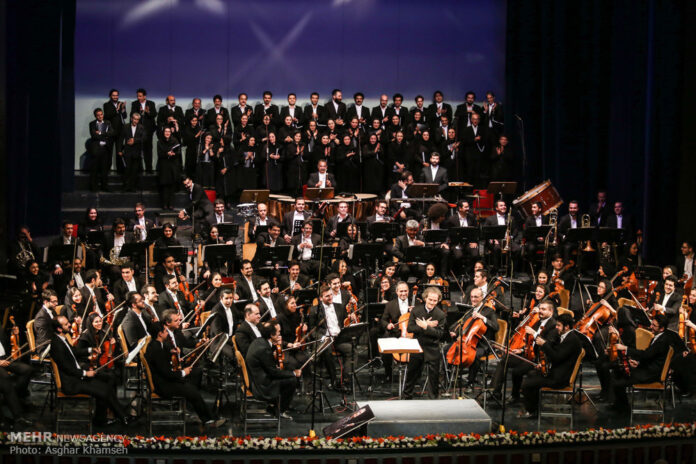 The Tehran Symphony Orchestra performed its first concert under new conductor Shahrdad Rohani at Vahdat Hall on Wednesday May 25, after the Vienna-based Iranian maestro Ali Rahbari resigned from the orchestra in April.

Some musicians, including violin virtuosos Arsalan Kamkar and Bardia Kiaras, and drummer Milad Omranlu, who separated from the Tehran Symphony Orchestra under Rahbari, accompanied the orchestra at the performance.

Pieces by Russian composers Sergei Vasilievich Rachmaninoff and Alexander Borodin, and German composer Ludwig van Beethoven highlighted the repertoire of the orchestra in the first part of its performance.

“I selected maestro Heshmat Sanjari’s Circle Dance for this concert, because this great musician made very substantial contributions to the progress of the orchestra,” Rohani said.

Rohani got a surprise when the orchestra celebrated his birthday by performing “Happy Birthday to You” when he had left the stage for an intermission.

“I will never forget this night,” said Rohani with a voice full of emotion, after returning to the stage.

“I am happy that this celebration was held for me in my homeland.”

Rohani, who has led some prestigious orchestras, including London’s Royal Philharmonic Orchestra, was appointed to the orchestra on May 8.

He has also been the guest conductor for Minnesota Orchestra, Colorado Symphony Orchestra, San Diego Symphony and the American Youth Philharmonic Orchestras.