Tehran in Talks with Moscow to Purchase Sukhoi Superjet 100 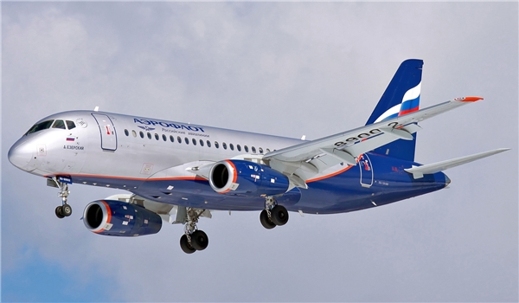 “Superjet 100 is a joint product of Boeing and Airbus aircraft manufacturing companies and 80 percent of its parts are made by the Russians,” Iranian Vice President for Science and Technology Sourena Sattari, who is also the President of Iran National Science Foundation (INSF), said on the sidelines of the International Aviation and Space Show (MAKS-2015) in Moscow.

He said Iran’s Kish Air, Zagros, and Caspian airline companies have been in talks with the Russians over the purchase of the modern airliner.

Sattari also noted that INSF and a Russian organization are to sign a Memorandum of Understanding to boost mutual cooperation in various areas of science and technology.

“The MoU is to be inked in a meeting held by officials from INSF and the Russian RFBR,” he said.

Sattari said on Tuesday Iranian officials will sign 10 economic agreements with the Russians during their visit to MAKS-2015 in Moscow.

“Iran and Russia have numerous potential for cooperating in various fields, specifically in aerial industries and industrial centers,” Sattari said in a meeting with Russian Minister of Industry and Trade Minister Denis Manturov in the Russian capital.

The Russian official voiced his country’s willingness to expand all-out ties with Iran for his part and invited Iranian investors to participate in Russia’s economic projects.

Manturov will visit Tehran in December.

The first session of the Iran-Russian Joint Commission of Science and Technology will also be held with Sattari and Russian deputy prime minister Dmirty Rogozin.

An Iranian delegation arrived in Moscow on Monday to discuss the delivery of Russian S-300 missile systems and take part in the MAKS 2015 air show.

The five-day space show kicked off on Tuesday in the town of Zhukovsky near Moscow.

More than 700 Russian and foreign companies from 30 countries will put their products on display at the show.

According to the exhibition director, 40 Iranian companies are also showcasing their products and achievements in MAKS-2015, including Iran Air Show, Qom International Airport, and Sharif Hamrah Pazhouhan Science and Technology Co.

Unlike previous years, Iranian firms and companies have been provided with a larger space in the exhibition this year.