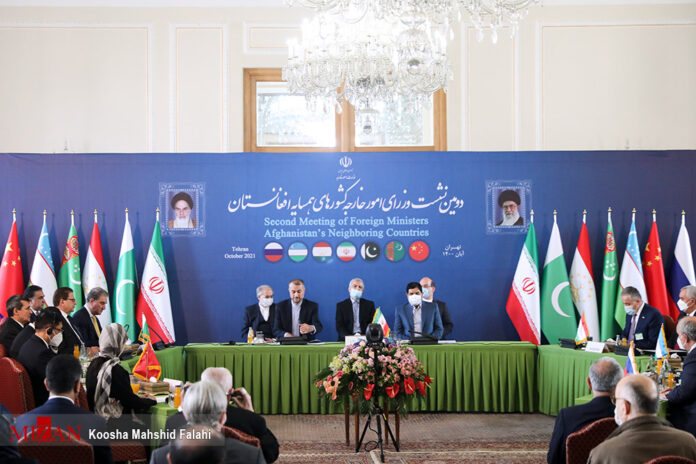 Foreign ministers of Afghanistan’s neighbors issued a joint statement at the end of their meeting in Tehran, reiterating the need for an inclusive political structure, with the participation of all ethnicities, as the only way out of the current situation in Afghanistan.

The meeting held in Tehran on October 27, was attended by foreign ministers of Iran, China, Pakistan, Tajikistan and Turkmenistan plus Russia.

The meeting opened with remarks by Iranian First Vice President Mohammad Mokhber on the current situation in Afghanistan. Later a video message by UN Secretary General Antonio Guterres was played and then participating foreign ministers took turns to address the forum. Participants concluded their meeting with a joint final statement.

The Foreign Ministers:
Seeing that the situation in Afghanistan has drastically changed underlined their support for the national sovereignty, political independence, unity and territorial integrity of Afghanistan and no foreign interference in its internal affairs;
With emphasis on globally-accepted principles of international law and respect for the ambition of the people of Afghanistan to realize lasting peace, expressed hope to see an Afghanistan that enjoys stability, development, welfare and harmonious relations with regional countries;

Expressed deep concern about the complicated military-political, social-economic and humanitarian situation in Afghanistan;
Agreed that countries, which hold the main responsibility for the problems in Afghanistan, should seriously meet their obligations and provide the country with the necessary economic and humanitarian aid as well as the needed assistance for the livelihood [of its people] to help a lasting transition in the situation in Afghanistan;
Noted that the only solution for the problems of Afghanistan is an inclusive and all-encompassing political structure with the participation of all ethnicities;
Expressed strong support of Afghanistan’s neighbors for achievement of peace, stability and national reconciliation in this country and encouraged all involved parties, including the Taliban, to continue talks and political consultations to help improve the future of the nation;
Reiterated that international and regional organizations, especially the United Nations and members of the UN Security Council, should adhere to their responsibility to advance a political resolution of the issues in Afghanistan and support Afghans with economic and humanitarian aid for development of [their country’s] economic-social infrastructures;
While expressing deep concern about the deteriorating economic situation in Afghanistan, called for provision of immediate humanitarian aid by the international community;

The Statement:
1. Calls for continued and realistic support for resolution of disputes through talks and negotiations among relevant parties to achieve national reconciliation, a lasting political solution and formation of an inclusive government.

2. Asks all Afghan sides to implement modest and cautious domestic and foreign policies, to quickly restore order to the society, to ensure effective performance of state offices, to provide the needed primary services to the people, to move to improve the livelihood of the people and to protect the basic rights of the individuals including ethnic groups, women and children in Afghanistan.

3. Calls for attention to the guarantees and obligations of the relevant responsible Afghan sides to the international community, so that the territory of Afghanistan would create no threat for the neighboring countries and would not be used by criminal, terrorist and separatist groups, and expresses hope that [relevant responsible Afghan sides] seriously end their ties with different terrorist groups, attack them and effectively eliminate them.

4. Asks relevant parties to adhere to all their undeniable responsibilities, adopt a friendly approach to neighboring countries, respect accepted principles of international law and basic human rights and support the security and legitimate rights of foreign nationals and institutions in Afghanistan.

5. Encourages all relevant Afghan parties to counter different threats and challenges including terrorism, drugs trafficking and human smuggling and crack down on organized crimes and other criminal acts that are rooted in Afghanistan, while keeping an eye on the terrorist threats and ensuring an effective fight on terror in Afghanistan, and engaging in bilateral or multi-lateral negotiations with the aim of making resumption of cooperation on fighting terrorism in Afghanistan in due course.

6. Asks relevant sides in Afghanistan and the international community to address the main reasons for migration and forced displacement in Afghanistan, to avoid any destabilizing move that worsens the situation and to cooperate to find a permanent solution for the continued problem of Afghan refugees.

9. Asks the international community to take specific steps to help Afghanistan against COVID-19 and to prevent the spread of the virus.

10. Proposes the creation of a mechanism for holding regular meeting of special envoys on Afghanistan. Also, agreement was reached for cooperation on the regular mechanism for meetings of the representatives of embassies in Afghanistan in the near future to help promote relevant cooperation and discuss the details to achieve more tangible results.

11. Stressed that the international community should continue its positive interaction with Afghanistan and draw out a long-term roadmap to advance political interaction, economic integrity and links in the region.

The foreign ministers thank the Islamic Republic of Iran for hosting the second round of this meeting and agree to hold a third round of the same meeting in 2022.