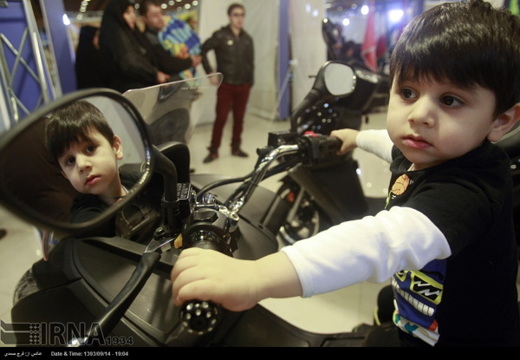 Tehran Municipality held an exhibition of motorbikes, the first step in broader plans to help the capital breathe cleaner air.

Tehran Municipality held an exhibition of electric motorcycles on December 4-10, in hopes of phasing in the light, eco-friendly bikes and taking off the streets the old gasoline-fueled motorcycles which account for almost 25 percent of Tehran’s nasty air pollution. The weeklong expo, the first in Iran, was held in a Tehran park attracting each day up to 2,000 visitors. The show was extended by two days due to public demand.

The motor show could be a step toward a phase-out of old bikes which the municipality plans to implement to help reduce air pollution. The following is a partial translation of a report by Hamshahri daily on the expo:

The exhibition put on display different brands of electric motorbikes produced in Iran together with those imported from Germany, the US, Italy and China.

Heshmatollah Bastami, the exhibition’s executive director, said that bike owners who work in and commute to downtown Tehran made up for the bulk of visitors.

The show came as the city management planned to replace as many as 10,000 motorcycles with electric motorbikes in the capital each year. This was also echoed by Mohsen Sarkhoo, the chairman of the Transport Committee of Tehran City Council, who hoped the slow-paced measure could be given momentum to keep pace with what has been stipulated in Tehran Municipality’s second five-year plan.

Under a decision by Tehran City Council, the capital’s municipality has been tasked with phasing out gasoline-powered motorcycles and replacing them with clean bikes.