Iran’s envoy to the Organization for the Prohibition of Chemical Weapons has called for a dialogue-based solution to the dispute between Russia and the West over an alleged nerve gas attack in the UK, saying western countries would do well not to politicize the issue.

“Politicizing any issue within the framework of OPCW is not to the benefit of members and puts in risk the credibility of the organization,” said Iran’s permanent representative to OPCW Alireza Jahangiri.

Jahangiri was speaking in an emergency meeting of the OPCW executive council on Wednesday over the incident, held at the request of Russia to counter accusations by Britain that it was behind the March 4 nerve agent poisoning of the Russian ex-spy Sergei Skripal and his daughter Yulia in Salisbury, England.

Skripal and his daughter were hospitalized following what is thought to be a chemical attack involving the A-234 nerve agent and are now in a critical but stable condition.

London blamed Moscow for the attack, which triggered mass expulsions of diplomats by Britain and its western allies, including the United States, and similar retaliatory action by Russia. 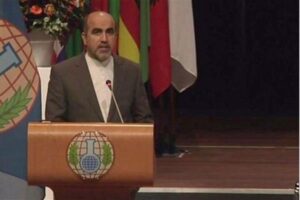 Jahngiri was referencing to the use of the weapons by former Iraqi dictator Saddam Hussein during the 1980s Iran-Iraq war, which Iran believes were provided to the Iraqi regime by Germany and other western countries.

The Russian representative to OPCW Alexander Shulgin said after the meeting Russia, Iran and China had presented a proposal to the OPCW for a joint investigation into the Skripal case by Russia and the UK.

The proposal failed to get the necessary two-thirds support for the draft proposal to pass.

The proposal was outvoted 15-6, with 17 abstentions among members of the organization’s 41-member council.

Russia says it has been pushed aside from a probe being carried out by the OPCW at Britain’s request, results of which are due next week.

Britain called the Russian proposal for a joint investigation a “perverse” attempt to escape blame for the poisoning of the Skripals, Reuters reported.

Shulgin responded that London has attempted to use the international body to support the results of its own investigation.

Speaking at a press conference in The Hague following the OPCW meeting, Shulgin emphasized that Russia would accept the results of any investigation into the Skripal case so long as it includes Russian experts, is transparent, and based on provable facts.