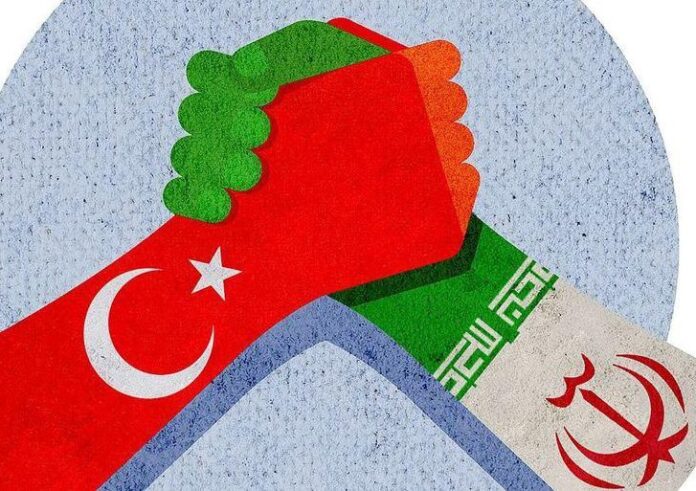 A political commentator says Iran and Turkey enjoy great potential to create a new regional order through the conclusion of military-security pacts.

Amid Turkish President Recep Tayyip Erdogan’s one-day trip to Tehran, political analyst Ehsan Hooshmand has, in an article published by the Persian-language daily Shargh, weighed in on the potentialities in Tehran-Ankara relations which can help create a new regional order through the conclusion of military-security pacts. The full text of the opinion piece follows.

Erdogan’s visit to Iran at this sensitive juncture in the Middle East is a sign of closer cooperation and new horizons in Iran-Turkey ties. Unlike the early years after the Turkish Justice and Development Party led by Erdogan came to power, a time when the party’s assuming power was welcomed by Iranian authorities and when Tehran-Ankara relations witnessed a very positive change, the recent years have been marked by a series of political moves in the Middle East known as the Arab Spring coupled with the emergence of ISIS in Syria and Iraq. These developments affected Iran-Turkey ties and finally brought about a kind of rivalry between the two countries, especially in Syria. Part of the rivalry was manifested in ethnic and religious moves in the region and the security vacuum caused by rivalry between the two regional heavyweights further fueled crises and instability in Syria and Iraq, especially in both countries’ border areas, so much so that the two nations’ national security was jeopardized.

Over the past century, both sides adopted approaches to stabilize mutual relations and, beyond that, regulate regional relations in the form of regional accords such as the Baghdad Pact, the Treaty of Saadabad and the CENTO Agreement. That restored stability and security to the region for a rather long period of time. However, today we are witnessing the foundations of order, stability and security collapsing in the region due to different regional and transregional reasons, leading to the spread of terrorism and instability in the Middle East. Such circumstances have caused the deaths of thousands of people and the displacement of millions and the destruction of a large part of the regional countries’ infrastructure. The restoration of stability and tranquility to the Middle East, especially in areas beyond the Iranian and Turkish borders, is contingent upon numerous variables, one of the most important of which is the reconstruction and restructuring of relations among major regional powers, namely Iran, Turkey, Saudi Arabia and Egypt. In this respect, relations between Iran and Turkey are all the more important as they are adjacent to one of the most crisis-hit areas in the Middle East. Accordingly, the spread of insecurity has posed serious dangers to both countries, and the restoration of tranquility to the region would be an integral part of Iran and Turkey’s national interests. Mutual trips to both countries by Iranian and Turkish political, military and security officials indicate both sides are determined to boost cooperation in a bid to ward off threats on the borders of the two countries. This can turn into an opportunity to lay new foundations for a regional order and set the stage for the conclusion of new agreements. The visits can also be a chance for both sides to rethink their policies in the region and identify the shortcomings over the past few years in a bid to pave the way for new horizons.

It is hoped that frequent visits and ongoing meetings by both countries’ officials coupled with realism and learning lessons from the current developments and drawing on the historical experiences, especially the ones in the past century, will lay the groundwork for deepening Iran-Turkey relations based on good neighbourliness as well as national security and interests.