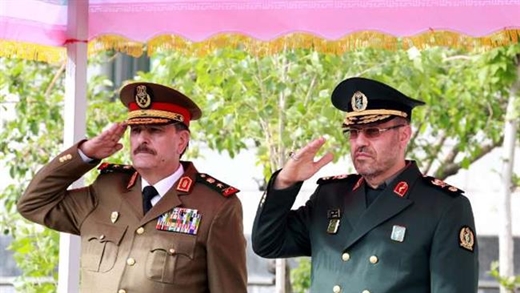 Syrian people with their unparalleled resistance made bullies understand that they cannot force the region’s Muslim nations to surrender, said Brigadier General Dehghan.

Takfiri terrorist groups in the region are fighting a “proxy war” on behalf of the United States and Israel, Iran’s defense minister says.

Brigadier General Hossein Dehghan made the remarks during a meeting with Syrian Defense Minister Fahd Jassem al-Freij in Tehran on Tuesday.

Dehghan said that “providing permanent security for the Zionist regime, weakening and disintegrating Muslim countries, altering the Middle East’s map, countering the wave of Islamic awakening, and ultimately complete domination over this Islamic region” are the main objectives of this war.

He also reiterated Iran’s full support for Syria in its battle against terrorism, saying that dialog is the only solution to the crisis in the Arab country.

“The people and government of Syria, with their unparalleled resistance made bullies understand that by exporting terrorists, arming and supporting them, and launching military attacks, they cannot force the region’s Muslim nations to surrender,” he added.

Dehghan went on to say that Saudi Arabia’s war on Yemen also runs parallel with the joint strategies of Israel and the United States, adding, “Undoubtedly the designers and executors of this sinister scenario… will not reach their ominous goals.”

Syria has been grappling with a deadly crisis since March 2011. The violence fueled by Takfiri groups has so far claimed the lives of over 222,000 people, according to UK-based Syrian Observatory for Human Rights.

The ISIL militants, with members from several Western countries, control parts of Syria and Iraq, and have been carrying out horrific acts of violence such as public decapitations and crucifixions against all ethnic and religious communities.

Since Saudi Arabia started its aggression against Yemen on March 26, the regime’s warplanes have repeatedly targeted residential areas in cities including Aden and Ta’izz.

On April 21, Riyadh announced the end of the first phase of its military aggression, which has claimed the lives of nearly 1,000 people so far, but airstrikes have continued with Saudi bombers targeting different areas across the country in a new phase.