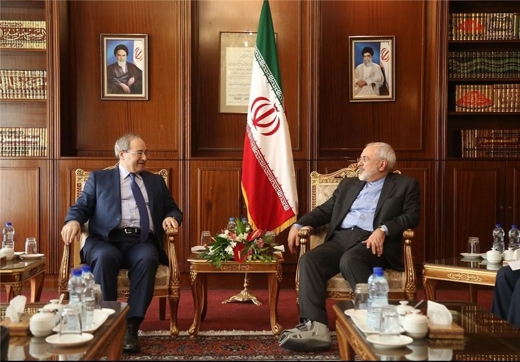 Other countries can at most play the role of a facilitator in the process of resolving the crisis in Syria, Zarif told the visiting Syrian deputy foreign minister.

Iranian Foreign Minister Mohammad Javad Zarif on Wednesday reaffirmed Tehran’s support for the peaceful resolution of ongoing crisis in Syria, reiterating that the Syrian people are the ones who should determine their future.

“The Islamic Republic of Iran’s policy on Syria is based on clear, logical, and firm principles,” Zarif said in a meeting with Syrian Deputy Foreign Minister Faisal Mekdad in Tehran.

“We believe the Syrian people themselves should decide their future and fate,” the Iranian minister stressed, adding that other countries can at most play the role of a facilitator in the process of resolving the crisis in Syria.

Zarif hailed the Vienna talks as “a good move towards a political solution”, adding that Iran clearly voiced its positions on Syria in the conference.

Mekdad, for his part, appreciated Tehran’s support for the Syrian nation and government, saying Iran’s measures will be recorded in history.

“We are grateful for your previous and recent efforts in helping resolve the crisis,” he said, adding that the Syrian nation will always remember Iran’s positive role.

Syria has been in a civil war since 2011, with opposition factions and terrorist groups such as ISIL and the Nusra Front fighting the Syrian Army.

More than 250,000 people have been killed so far in Syria due to the violence perpetrated by the terrorists.