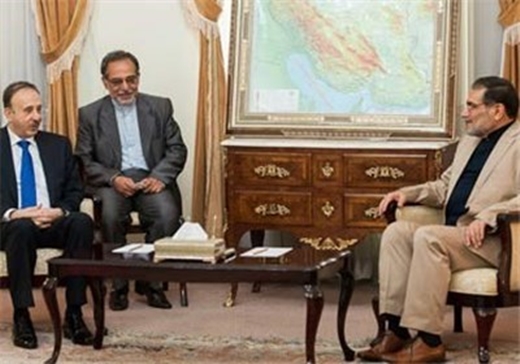 Undermining Syria will definitely lead to crises and uncontrollable situations in all neighboring and regional countries, Shamkhani said.

“Syria is at the forefront of efforts to defend the Islamic territories against the Zionist regime and the unbridled wave of Takfiri terrorism,” Shamkhani said Tuesday in a meeting in Tehran with Syrian Parliament Speaker Mohammad Jihad al-Laham.

Undermining Syria would definitely lead to crises and uncontrollable situations in all neighboring and regional countries, he added.

Shamkhani went on to say that the US and its regional allies are openly training and equipping Takfiri terrorists and violating the United Nations Security Council resolutions.

He said these countries are mistaken if they think they can provide security for the Zionist regime by creating crises in the region.

The Syrian parliament speaker, for his part, appreciated Tehran’s supports for Damascus and said the assistance provided by certain countries for the extremist and terrorist groups in Syria has been “a dark record” for them because they have preferred to serve the interests of colonial powers instead of their own nations.

Syria has been gripped by civil war since March 2011 with Takfiri terrorists from the Islamic State in Iraq and the Levant (ISIL) currently controlling parts of it, mostly in the east.

The US and its regional allies have been supporting the militants operating inside Syria for more than four years.