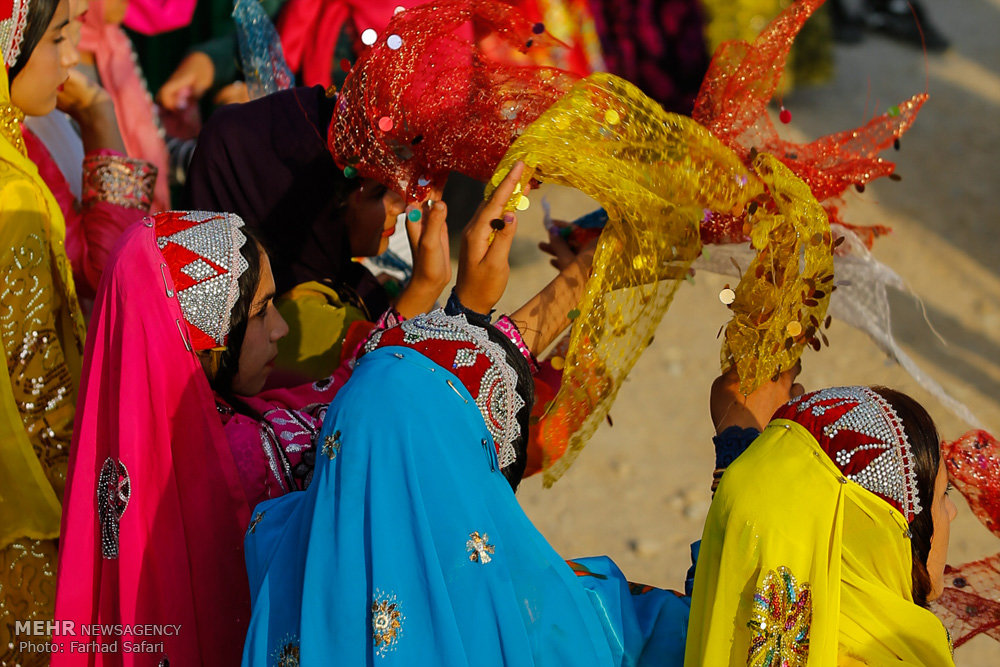 Bakhtiari people, a tribe inhabiting the southwestern provinces of Iran, wear colourful clothes at their wedding ceremonies and dance in groups to folklore traditional songs called ‘Dovalali’ (groom and bride) in local dialect.

Since a long time ago, celebrations, particularly wedding ceremonies, have had a special status in the Iranian culture.

These ceremonies have roots in the Iranians’ identity and history. They indicate that Iranians people have always devoted some time to merrymaking and feasting, according to a Farsi report by the Mehr News Agency.

The outcome of the continuous holding of such celebrations and ceremonies is that Iranian people from different ethnicities have managed to keep their customs and traditions alive and hand them down to the next generations.

Holding wedding ceremonies has a long historical background in Iran, dating back to ancient times. Different ethnic groups in the country have their own special beautiful and attractive customs and traditions for holding the celebration.

Among Iran’s different ethnic groups, Bakhtiari people, a tribe dwelling in the southwestern parts of the country, hold their wedding ceremonies in a very special and interesting way. The world of these folks is full of colours, merriment, cooperativeness, attractive sounds and playing percussion instruments such as Dohol, a double-headed drum. These folks are original people who speak their own dialect and have a rich and colourful music and culture.

Marriage is a very hallowed and important tradition to these people. All members of the tribe cooperate in holding a wedding ceremony.

The clothes they wear in their marriage ceremonies display a wide range of hues which creates a scene reminiscent of the colourful works of Jackson Pollock, the American painter and a major figure in the abstract expressionist movement.

The most interesting part of Bakhtiari people’s wedding ceremony is the group dance they perform and the songs they sing to celebrate this happy and blissful event. The songs they sing in their marriage celebrations are called ‘Dovalali’ that is made up of two parts: ‘Dova’ which means groom and ‘lali’ meaning bride.

In fact, by their group dance, these tribesmen and women display their unity and solidarity and teach their youths the correct way of respecting the elderly.