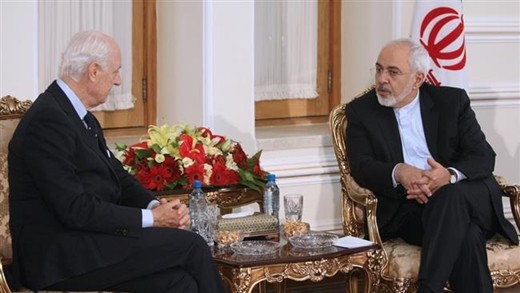 In a meeting with Staffan de Mistura, Zarif reaffirmed Iran's position on the need for a political settlement of the crisis in Syria.

Iran’s foreign minister says foreign support for militants in Syria and Iraq is causing instability and a humanitarian tragedy in these two Middle Eastern countries.

In a meeting with the visiting United Nations special envoy to Syria Staffan de Mistura, Mohammad Javad Zarif said continued support for terrorist groups is the root cause of crisis and extremism across the Middle East.

Zarif also reaffirmed Iran’s position on the need for a political settlement to the crisis in Syria.

For his part, de Mistura said the UN seeks a new political approach to settle the ongoing deadly crisis in Syria in a peaceful and democratic way.

He added that Iran can play a very constructive and helpful role in the settlement of the crisis in Syria.

A UN spokesman said on Friday that de Mistura is expected to submit initiatives to the world body by the end of this month in a bid to help resolve the Syria crisis.

The UN envoy “intends to finalize by the end of July his proposals to the secretary-general [Ban Ki-moon] on a way forward to support Syrian parties in their search of a political solution to the conflict,” the spokesman said.

Since March 2011, Syria has been grappling with a militancy sponsored by foreign governments including Turkey, the United States and some regional Arab allies. The crisis has left nearly 230,000 people killed.

He added that finding a political solution to the Syrian conflict and examining ways to fight terrorism are among other aims of de Mistura’s trip.

Iran’s proposed peace plan stresses a political settlement to the crisis in Syria, the territorial integrity and independence of the Arab country as well as its people’s right to self-determination in a democratic election.