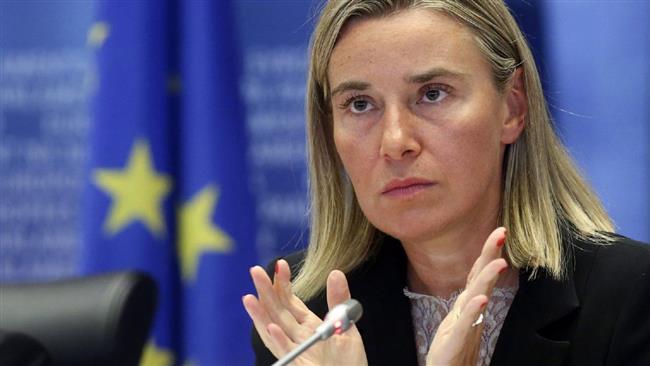 Spreading fears is not helpful at this stage. We are getting closer to a comprehensive accord aimed at ending the longstanding dispute on Tehran’s nuclear dossier, said Mogherini.

The European Union says “spreading fears” about an emerging deal between Tehran and P5+1 on Iran’s nuclear program is unhelpful.

Speaking to reporters in the Swiss city of Geneva, on Tuesday, EU foreign policy chief, Federica Mogherini, warned against “spreading fears” about a final nuclear deal that is being negotiated by representatives from Iran and the six states.

Her remarks came just as Israeli Prime Minister Benjamin Netanyahu, who has repeatedly attacked the emerging Iran deal, began his speech at US Congress.

The senior EU diplomat further said Tehran and its negotiating partners have taken “significant steps in the last weeks, with a lot of political will that I see on many sides.”

“(In) the talks of this last round, including the one of today, (there) were encouraging signs,” Mogherini said, adding, “I would like to make an appeal, a plea to all public actors to facilitate rather than put in danger diplomatic efforts that have been extremely difficult.”

Mogherini also stated that she had held a phone conversation with US Secretary of State John Kerry on Tehran’s nuclear issue and was set to discuss the matter with Iranian Foreign Minister Mohammad Javad Zarif later on Tuesday.

The EU foreign policy chief made the comments as officials from Iran and the United States are holding a second day of discussions in their latest round of talks over Tehran’s nuclear program in the Swiss city of Montreux.

Zarif and Kerry, who are heading the Iranian and American delegations, sat down for more than two hours of nuclear discussions on Monday.

The new round of talks in Montreux comes as representatives from Iran and the United States held three rounds of intense negotiations in the Swiss city of Geneva on February 22-23 to bridge their differences ahead of the July 1 deadline for Iran and P5+1 to reach a comprehensive nuclear deal.

Irked by the interim accord between Tehran and P5+1, Israeli authorities have been lobbying over the past year to hinder a permanent accord on Tehran’s nuclear case.

In his latest attempt to sabotage a lasting nuclear agreement, the Israeli premier told US congressmen on Tuesday that a future accord would benefit the Islamic Republic, accusing Washington of negotiating a “bad deal” with Iran.

Netanyahu claimed that the nuclear agreement would provide Iran “with a short breakout time for a bomb,” adding, “According to the deal not a single [facility] would be demolished… because Iran’s [facilities] would be left largely intact.”