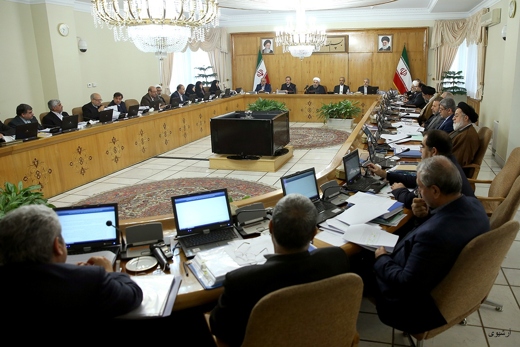 The Sixth Development Plan proposed by the government is to help bring changes to the economic, energy and industrial sectors as well as government recruitments.

The eleventh government finally put out its proposed draft of the Sixth Development Plan with some delay. Downsizing the Power [Energy] Ministry and merging part of it with the Oil Ministry to form a new Energy Ministry is one of the main goals of Iran’s 6th Five-Year Development Plan (2016 – 2021).

Dissolution of a number of organizations affiliated to the Ministry of Industries, Mines and Trade, mergers and bans on new hiring by state agencies, dissolution of the Housing Foundation, etc. envisioned in the proposed bill [drafted by Iranian Management and Planning Organization] all show the eleventh government’s determination to trim the government. Experience has shown that such downsizing does not necessarily bring about a decline in government costs and that the shrinking of the government should be done with some considerations.

Vaghaye-e Etefaghiyeh on December 13 published a piece on the drafted Sixth Development Plan. The following is the translation of part of that piece:

The birth of [new] Energy Ministry

Creation of a new energy ministry and dissolution of parts of the Power Ministry which focused on energy comes as the ministry has the most subsidiaries in the country. These subsidiaries placed a heavy burden on the government’s shoulders. […]

The Oil Ministry which is a giant ministry is unable to handle certain parts of itself. By the end of the first year of the Sixth Development Plan, the Energy Ministry will be created after the energy-related parts of the Power Ministry are merged with the Oil Ministry.

Transformation of Ministries of economy and industries

Under the Sixth Development Plan, the responsibilities of the ministries of industries and agriculture on the commercial front will be delegated to the Ministry of Economic Affairs and Finance which is among the smallest ministries in the country.

Scaling down the government size and hiring

Dissolution of University of Applied Science and Technology, and the shutdown or takeover by the private sector of more than 50 percent of the branches of Payame Noor University is simply part of the plans to make the government thinner.

Under the Sixth Development Plan, only 15 percent of executive bodies are to be dissolved. The government has characterized the deletion of these bodies as a decision in line with efforts to help the resistance-based economy. The question is whether downsizing the government can help maintain its efficiency and reduce its size.

[…] In other words, the Rouhani administration is not expected to repeat the mistake of its predecessor and start a wave of hiring (as the labor minister has put it).