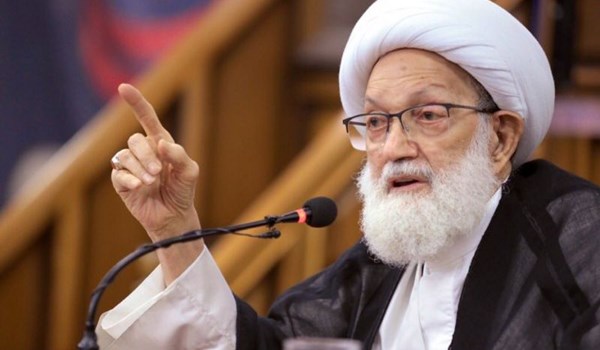 Prominent Bahraini cleric Sheikh Isa Qassem has pledged that the uprising by the people of the country will only end when they achieve their demands and objectives.

Sheikh Qassem made the comments in a ceremony to mark the 11th anniversary of the beginning of the popular uprising in the Persian Gulf country against the ruling al-Khalifa regime.

Sheikh Qassem warned some people are attempting to pretend that the uprising is over after partial realization of its demands.

He stressed that the ruling regime in Bahrain should accept and respect the demands of people.

“The oppressive policies of the Bahraini regime have created a grave situation for the people in terms of politics and their livelihood. This fact prompted the people of Bahrain to stage an uprising to achieve their demands and launch a movement and it was said from day one that this uprising and movement will only end with the realization of the demands of people,” he said.

The Bahrain uprising began in 2011. The protesters have been calling for the right to vote and an end to the al-Khalifa rule in their country. The uprising has faced a bloody crackdown by the regime.