Senior Shiite Cleric Thanks Pope for His Stance on Islam 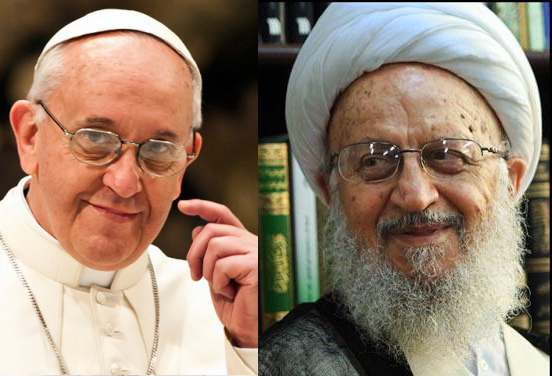 According to a report by Jomhouri Eslami newspaper, as translated by IFP, Ayatollah Makarem Shirazi penned a thank-you-letter to the Pope on account of the Catholic leader’s recent denial of any relationship between terrorist operations by Takfiri [extremist] groups and Islam.

“I explicitly announce that according to Muslim scholars and the vast majority of Muslims, Takfiri sects are renegades of Islam and deemed to be the greatest scourge on humanity,” he wrote in his letter which was handed to the Pope by Iran’s Ambassador to Vatican City.

In his letter, Ayatollah Makarem Shirazi also condemned the July murder of a French priest by terrorists at a church in France.

His remarks came after Pope Francis defended Muslims and stressed that ‘Islam is NOT terrorism’.

In early August, the Pope said, “I think it is not right to identify Islam with terrorism.

“It is not right and it is not true.”

Francis was responding to a question about the killing on July 26 of an 85-year-old Roman Catholic priest by knife-wielding attackers who burst into a church service in western France, forced the priest to his knees and slit his throat.

The attack was claimed by ISIS, as reported by The Express.

He said, “I think that in nearly all religions there is always a small fundamentalist group.”

“We have them,” he said, referring to Catholicism.

“If I speak of Islamic violence, I have to speak of Catholic violence. Not all Muslims are violent.”

He said there were various causes of terrorism.

The Pope said, “I know it dangerous to say this but terrorism grows when there is no other option and when money is made and it, instead of the person, is put at the centre of the world economy.

“That is the first form of terrorism. That is a basic terrorism against all humanity. Let’s talk about that.”