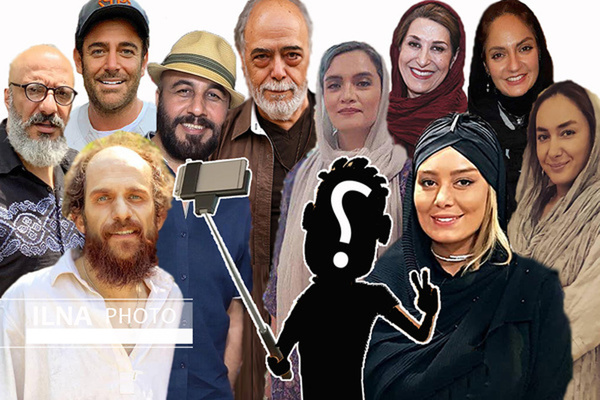 A group of about 50 theatre and cinema lovers have dedicated their lives to accompanying celebrities, attending all theatre performances and movie releases to take photos with their favourite actors wherever they can and share them on their Instagram page.

Taking photos with celebrities is the most fun and interesting activity for members of this group, which some call “Selfie-takers”, but they call themselves “friends”.

One is in love with Shahab Hosseini and Mohammad-Reza Golzar and the other is crazy about Sahar Qoreishi and Mahnaz Afshar.

ILNA has interviewed some of these theatre and cinema enthusiasts on the sidelines of a recent banquet held for well-known actors and their fans in the courtyard of Neauphle-le-Château mansion in Tehran, where a theatrical performance was underway.

Hamid Zamani Sami, known as Mr Sami, is a 42-year-old composer and singer. He is known as a longtime fan of theatre and cinema. He took his first selfie in March 2016, along with actors Mehravah Sharifinia and Amir Jafari. He says the actors love him and are his friends because, according to his old habit, he always buys presents for his favourite actors.

Hengameh Bakhtiari is a thirty-year-old girl with a bachelor’s degree in film directing. She says she is one of the students of famous Iranian actor Jamshid Mashayekhi.

She says she has followed cinema and theatre since she was much younger. First, she buys the tickets to all theatres and watches them, and then takes a photo with the actors.

Mehran Afshari is another fan of theatre and cinema figures. He is 24 years old and his favourite actor is Sahar Qoreishi. Wherever she appears, Mehran could be seen around. He says there is a Telegram group that many of those who are fond of cinema and theatre inform each other about the programs. They appear wherever there are more guests and more famous actors.

According to Bakhtiari, fans wait for hours to take a photo with their favourite actor. “Some can afford to watch the theatre and some cannot. Because the tickets are expensive” she says.

Hengameh has bought the ticket to watch the drama of her favourite actor at a price of 30 dollars. However, she is happy with the price because she believes “Shahab Hosseini is very gentle and honourable.”

Sami says theatre actors and artists love him and often give him tickets; therefore, he watches many plays in a month, but other selfie-takers buy tickets either at discounted prices or at the original price.

Celebrities’ Gifts for Their Fans

Sami says their group is composed of often single and male friends. There are several ladies among them and the married guys come along with their spouses. Sami says he has been taking selfies since three years ago when Reza Attaran (actor) bought him a smartphone as a birthday gift.

According to him, Reza Attaran, Reza Kianian, Mahnaz Afshar, Fatemeh Motamed-Aria and Mohammad-Reza Golzar are very sociable actors in dealing with their fans.

“But there are some artists who break the hearts of their fans. When you support your fans, you are a real celebrity.”

Bakhtiari says their group members are mostly movie and theatre lovers. She says “I think actors need us. We have to be there for them. We have to buy theatre and cinema tickets to make a movie sell for millions of dollars.”