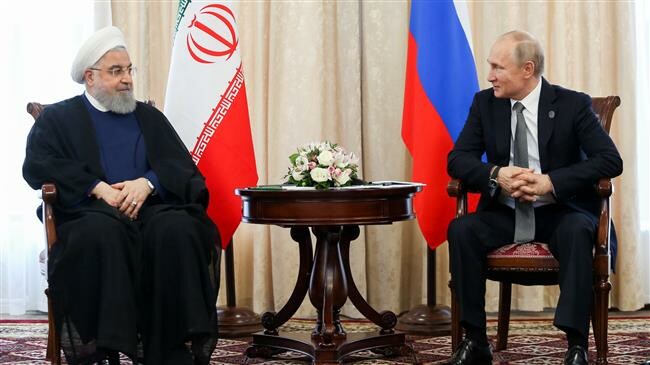 Iranian President Hassan Rouhani and his Russian counterpart Vladimir Putin have discussed expansion of business ties between the two states in a range of fields, particularly in the energy sector, despite Washington's unilateral sanctions.

The two sides met on Friday on the sidelines of the 19th Summit of Shanghai Cooperation Organization (SCO) in Bishkek, the capital of Kyrgyzstan.

Rouhani hailed the “good pace” of the implementation of economic agreements between Tehran and Moscow, particularly in the field of energy.

“The meeting of the Iran-Russia Joint Commission for Cooperation that is going to be held in Tehran next week will accelerate this process,” he said.

“By adopting a law on trade with Eurasia in the Parliament, we will provide the preparations as soon as possible, which will accelerate business cooperation,” he noted.

Putin, in turn, said his country “remains interested in being present and investing in the energy sector [of Iran] and is committed to cooperating in a wide range of areas of interest to the two countries.”

Back in late May, Russian energy giant Gazprom had suggested that it was evaluating potential participation in Iran’s energy projects.

“As of today we are at the stage of considering our participation in projects in Iran,” Gazprom’s deputy chief executive officer Vitaly Markelov said on May 28.

“A joint coordination committee with the Iranian side considers all those issues,” Markelov added.

Gazprom reported on December 14, 2017 that it had signed a roadmap on implementation of projects in Iran and a memorandum of understanding on an LNG project in Iran.

Later in November 2018, Gazprom and National Iranian Oil Company (NIOC) signed a number of memorandums of cooperation in the gas sector. The documents stipulated partnership in the field of development of Iranian gas fields, gas transporting and monetizing.

In their Friday talks, Rouhani and Putin also vowed to boost Tehran-Moscow relations in  other bilateral, regional and international areas despite the US sanctions.

“Despite the existing problems, the two countries’ trade relations are developing,” Putin said in the meeting.

He also vowed that his country will implement the agreements it has signed with Iran on the construction of new units in the Bushehr nuclear power plant.

The remarks came one month after the US Department of State warned that sanctions would be imposed on countries that provided assistance to expanding Iran’s Bushehr nuclear power plant.

In 1992, Iran reached a deal with Russia on the first phase of the Bushehr project. The two sides signed a number of documents in November 2014, expanding cooperation in the field of peaceful use of atomic energy and opening the possibility of construction in Iran of up to eight power units.

In May 2018, President Donald Trump withdrew the US from a multilateral nuclear accord, officially known as the Joint Comprehensive Plan of Action (JCPOA), which was reached between Iran and six world powers in 2015. Afterwards, Washington reimposed unilateral sanctions on Iran that had been lifted under the deal.