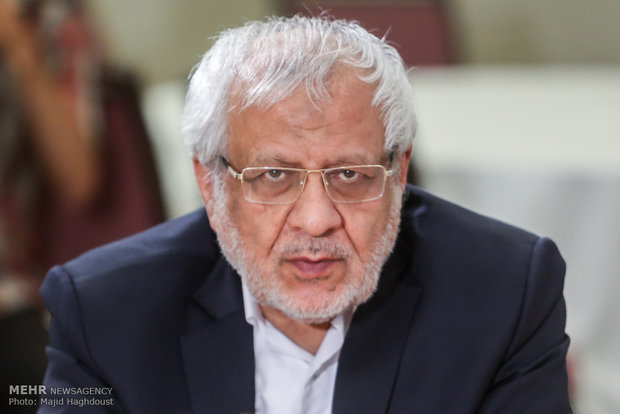 A veteran Iranian diplomat and a senior conservative believes that President Hassan Rouhani has made its government dependent on the nuclear deal with world powers, but JCPOA will not have a happy ending under his administration.

In an interview with Mehr, as translated by IFP, Assadollah Badamchian, the deputy leader of Islamic Coalition Party*, said the nuclear deal between Iran and the Group 5+1 (Russia, China, the US, Britain, France, and Germany) – also known as JCPOA – is a complicated phenomenon.

“At the beginning, President Rouhani’s administration was very optimistic about JCPOA, but its optimism gradually decreased,” he noted.

“The recent change of US President and the problems of the European Union have cast doubt over the fate of nuclear deal. Today, the happy faces of Iranian statesmen at the beginning of JCPOA implementation have turned to frowning faces looking for solutions after the termination of JCPOA.”

Making his government dependent on JCPOA was Rouhani’s big mistake, but his bigger mistake was his choice of reformist figures in the cabinet.

Badamchian noted that the major question in Iran and other countries is now about the nuclear deal’s fate.

“Today Americans do not know what to do with JCPOA. Trump said he would scrap it, but he is longer talking about it after his victory in the US elections,” he noted.

“And Obama, who has disgraced the US, on the one hand talks about his commitment to JCPOA implementation, and on the other hand, signs [the extension of] anti-Iran sanctions,” Badamchian added.

“There are conflicting opinions in the EU as well. They don’t share the US view, but they cannot take a final decision. There is a huge conflict of opinion among European states in this regard.”

“European are willing to implement the nuclear deal, but they are worried about Washington’s reactions. They have failed to reach a consensus on how they approach Iran,” he went on to say.

He further criticized Rouhani’s government for lacking an effective and decisive solution, and said, “Rouhani’s big mistake was to make its government dependent on JCPOA.”

Badamchian also lashed out at reformists and said Rouhani’s bigger mistake was his choice of reformist figures in the cabinet.

“Reformism and reformists have not been and are not able to resolve the problems of Iran’s Islamic Revolution with the US, Europe, and other countries.”

“Given their willingness to have interaction with the US and Europe, reformists were too optimistic and hasty in negotiations to sign a deal with the Western world,” the senior conservative asserted.

Certainly, the way out of this deadlock is not choosing a president who thinks like Ahmadinejad, because they just think of cutting [ties], while the results should also be considered in negotiations.

Therefore, he added, they fulfilled Iran’s commitments before Westerners do theirs, and now their hands are empty.

Meanwhile, Westerners’ hands are not full either, he added.

“Certainly, the way out of this deadlock is not choosing a president who thinks like Ahmadinejad, because they just think of cutting [ties], while the results should also be considered in negotiations, and the country’s capabilities and opportunities should be tapped into for realizing our causes,” he noted.

“It is for sure that Rouhani’s government, reformists, and state moderates will not be able to resolve this issue. If Rouhani manages to be re-elected in the upcoming election, the problem will remain unresolved,” Badamchian stressed.

“The only solution is the election of a government that can avoid optimism and wrong attitudes towards the West, and at the same time stay away from radicalism and bringing the negotiations to a deadlock.”

He described the ideal president as a thoughtful, brave, prudent, and strong leader who will be able to get the ‘complicated phenomenon’ of JCPOA to an acceptable destination with an appropriate pace.

“The vigilant nation of Iran will help resolve this issue by making a correct choice,” Badamchian added.

* The Islamic Coalition Party is a conservative political party in Iran, which played a vital role in the success of the Iranian Revolution in 1979. Though still very active and influential, the organization experienced a gradual elimination from political power after rise of new conservative rivals in 2000s.

One of the oldest among the active parties in Iran, it represents older generations of conservatives and its main base of support is among bazaari merchants and shopkeepers in Grand Bazaar of Tehran and other cities and traditionalist clerics. It is probably the only political organization in Iran which possesses an organic relation with such a social base.

Since 1979, the party members have held high government offices and are influential players in the economy of Iran, dominating Iran’s Chamber of Commerce Industries and Mines (ICCIM).