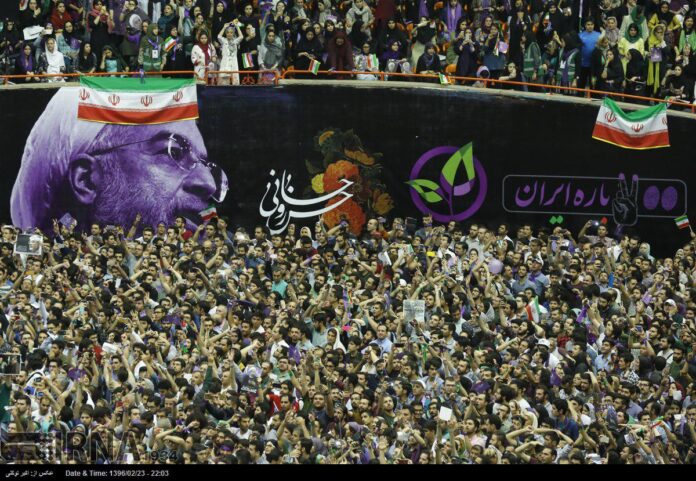 Iranian presidential candidate Hassan Rouhani has called on the nation to declare in May 19 votes whether they seek to move backward in time to 2012 or want to head for 2021.

Rouhani, who is one of the six candidates contesting Iran’s May 19 presidential election, has urged the Iranian people to decide on Friday (the Election Day) whether they want to experience regression or progression in the next four years.

He called on them to announce whether they want to tread the path of peace and tranquillity or to take the road to tension.

Addressing nearly 20,000 of his supporters, who had convened in Azadi Stadium in Tehran on Saturday, Rouhani said what people demand is not just respecting the youths.

“They want the country to be managed and run using young people’s thoughts and ideas. We are required to announce to the world that we are determined to construct Iran, not to destroy it.”

He said his administration has managed to transform the image some used to present of Iran to the world, adding Iran is now known internationally as a land of hope and moderation, instead of a violent and extremist state.

“We, despite the disposition of a minority group, chose our path together and want to continue it for another four-year term. There were a large number of problems, but I refrained from talking about them to keep the peace and ensure security in the society.”

He said his administration respects critics, adding, however, that slandering fails to be a wise move in the long-term and does not guarantee a bright future for the country.

“Let’s tell the truth to the people. Did you know that during the days we were in [nuclear] talks with the world powers (P5+1), a number of people prioritized factional issues over national interests and stabbed [the government] in the back.”

“I [publically] announce that the ‘Moderation and Reforms Government’ [the name given to Rouhani’s government] belongs to the entire Iranian nation. I have not forgotten the promises I made in 2013. I have either fulfilled them or have been prevented [by some] from honouring them.”

Rouhani stressed that the government resisted against those who put it under pressure to block Iranians’ access to a number of social media, adding a number of people were against providing people with free access to the internet to prevent the dissemination of information about their corruption and exploitation of public properties.

‘All Anti-Iran Sanctions Must Be Lifted’

“Has the removal of Western sanctions worked to the detriment of the Iranian people? Of course, those who benefited from the embargoes are not happy [with their lifting]. We do not content ourselves with the removal of only the nuclear restrictions. [We maintain that] all the sanctions [nuclear and non-nuclear] must be lifted,” Rouhani stressed.

Remarks about the removal of all sanctions on Iran made by Rouhani at Azadi stadium came as a day earlier (May 12), he had made the same pledge in the third and last live election TV debate, before the eyes of millions of television viewers as well as his three conservative rivals. The fact that Rouhani reiterated the promise a day later in front of nearly 20,000 of his supporters, implies that the pledge has not been a bluff at all.