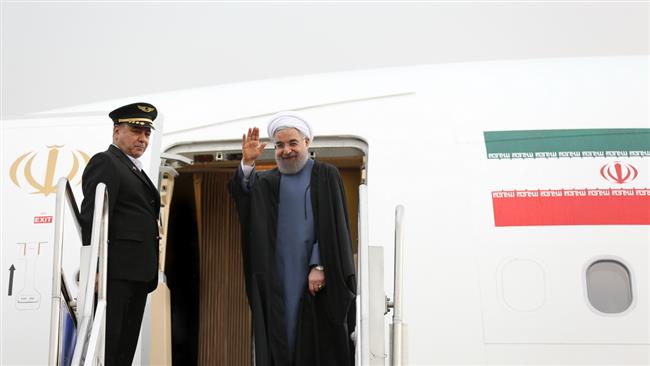 Iran’s President Hassan Rouhani says Tehran has always seriously pursued the fight against terrorism and it has given assistance to other countries in this regard.

“The Islamic Republic of Iran has always seriously followed the fight against terrorism in the Muslim world and practically any nation and government that has sought Iran’s help, Tehran has offered its help and assistance,” Rouhani said before flying to the Turkish port city of Istanbul to take part in the 13th summit of the Organization of Islamic Cooperation (OIC).

The Iranian president elaborated on Iran’s assistance to the Muslim countries in their fight against terrorism, saying the governments of countries such as Iraq and Syria have enjoyed Iran’s support in this regard.

Rouhani further noted that the Muslim world is currently grappling with such problems as terrorism, extremism and sectarianism, while “some countries are unfortunately invading other countries.”

He stated that one of the goals of the OIC is to create unity among Muslim nations, expressing hope that the organization would be able to resolve differences among Islamic states.

“We hope there would be helpful discussions in this summit about the settlement of disputes in the Muslim world, fostering unity and solidarity among Muslim countries, and especially the issue of fighting terrorism,” Rouhani said.

The OIC summit will be held under the theme, “Unity and Solidarity for Justice and Peace.” A resolution on the Palestinian issue and support for international efforts to re-launch a “collective political process” will be issued at the end of the summit.

The OIC is the second largest inter-governmental organization after the United Nations which has 57 member states spread over four continents.