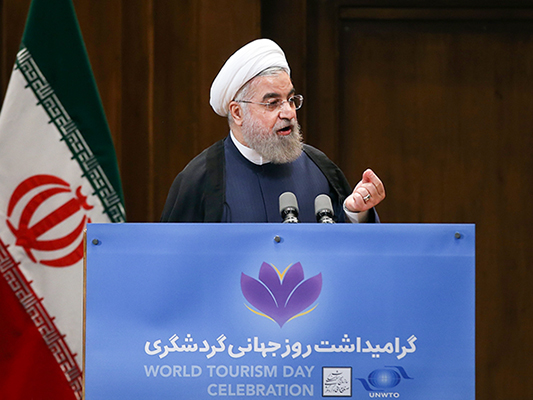 President Hassan Rouhani says Iran has managed to prove to the world that the phobia about its peaceful technologies and defense power is baseless.

“Iran’s image today is different from what it used to be a few years ago,” he told a ceremony marking World Tourism Day in Tehran on Monday.

Rouhani credited his administration with “dismantling the Iranophobia plot,” saying Iran’s nuclear agreement has lightened up the mood for travel to the country.

“The situation today is such that those governments which deterred their citizens from traveling to Iran are advising their tourists to visit Iran as a safe country,” he said.

“We made a big investment for this security,” President Rouhani added.

“They finally said that the case of possible military dimensions has been closed and that they would now look at Iran’s future nuclear program and not the past. This marked an end to an important aspect of Iranophobia in the world.”

Rouhani described tourism as “one of the launchpads” of development, progress and growth, saying Iran must use its tourism attractions to achieve those goals.

“One of our important goals is the issue of employment, technology and investment. Through the tourism industry which apparently is an easy but in fact a complicated field, we should achieve these objectives.”

Rouhani said, “Iran is one of the top 10, or according to some people, five countries in the world in terms of natural, climatic, historical and cultural attractions.”

“The cultural heritage of this land is one of the most important attractions in its ethnic, religious and linguistic diversity and tradition which can become an important tourism target,” he added.

The president also touched on Iran’s celebration of Defense Week which marks the Iraqi invasion of the Islamic Republic under the former dictator Saddam Hussein in 1980 and hailed the sacrifices of “the great Iranian nation.”

“Like the beloved youths who managed then to defend Iran’s territorial integrity, national sovereignty and independence, our nation and its youths today have the same preparedness to defend the country and its revolutionary achievements.”