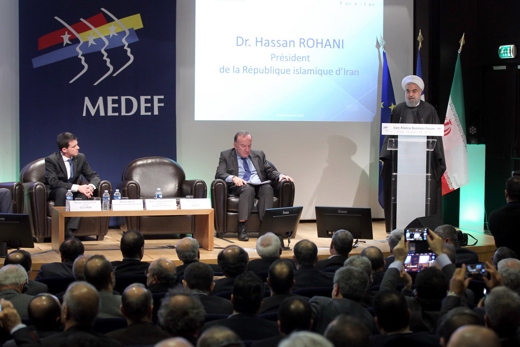 Iran’s President Hassan Rouhani has slammed the sanctions policy adopted by certain powers against other countries.

“The policy of sanctions has always been a wrong policy and has never proved to be successful in the course of history,” Rouhani said in a Thursday meeting with French executives and businessmen in Paris.

Two unnamed EU officials were cited on Wednesday as saying that France had asked its partners to consider new sanctions on Iran over its recent missile tests. The report by the Associated Press, however, was refuted hours later by EU diplomats and a French official.

“No such request was made,” said one EU diplomat, speaking on condition of anonymity.

President Rouhani also said the nuclear deal reached last year between Iran and the P5+1 group of countries proved how dialog can pave the way for the progress of nations.

Iran and the P5+1 – the US, Britain, France, China, and Russia plus Germany – reached the nuclear agreement, dubbed the Joint Comprehensive Plan of Action (JCPOA), in July 2015. The deal went into force on January 16, its “implementation day.”

“This agreement told the world… that the negotiating table can be quite influential and effective,” Rouhani said.

Referring to the long history of relations between Tehran and Paris, the president said time is ripe for the two sides to enhance their relations, adding Tehran is prepared to open a new chapter in the ties.

Leading a high-ranking political and business delegation, Rouhani arrived in Paris on Wednesday from a two-day visit to Italy.

France will be the last leg of Rouhani’s tour of Europe. The trip is expected to open a new chapter in business and trade relations between the two countries as officials strike deals worth billions of dollars.

In their business forum on Thursday, officials of the two countries announced a set of business tie-ups and export deals, including the sale of dozens of Airbus planes and a car factory revamp.

French Prime Minister Valls said there would also be agreements signed in the areas of health, agriculture and the environment.

“Let’s forget past differences and start anew,” Rouhani said in a speech to the forum, in an apparent refrain to France’s hardline stance in nuclear talks and on issues related to regional developments.

“We are ready to turn the page” and establish a “new relationship between our countries,” Rouhani added.

Four business arrangements are flagged by France’s main industry body including the PSA Peugeot Citroen tie-up and a plan to sell over 100 Airbus passenger planes.

French officials said Iran was putting the finishing touches to the Airbus deal. People close to the discussions said technical talks were continuing.

“Iran’s needs are enormous,” Gattaz told reporters. “Iranians need everything. The country is not starting from scratch, it’s got a very educated workforce, a real development
potential.”