Rouhani calls for boost of ties between Iran, Germany 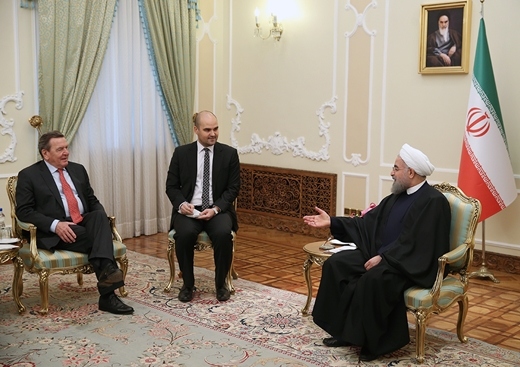 Iranian President Hassan Rouhani on Tuesday called for expansion of all-out ties between Iran and Germany.

He made the remarks in a meeting with former German chancellor Gerhard Schroeder.

The President encouraged optimal use of capacities made by the nuclear deal (between Iran and G5+1), adding that Tehran and Berlin have opened the way for expansion of their all out ties.

Reminding the constructive role of Germany in nuclear talks between Iran and G5+1, he said that Iran will be bound to its obligations enshrined in the Joint Comprehensive Plan Of Action (JCPOA) but hopes that other sides will do the same.

The President said that Iran and Germany can enhance their constructive role for solving regional problems.

Terrorism is a common problem and threat not only to the regional countries’ stability and security but also it has caused trouble for Germany, he added.

Rouhani called for dispatch of humanitarian reliefs for refugees, adding that Islamic Republic is ready for cooperation with other states in the fight against terrorism.

Schroeder headed a trade delegation for an unofficial three-day visit to Tehran. The 27-person group is mostly made up of representatives from German companies and the country’s economic sector.

The visit marks an increase in foreign firms vying over Iran’s lucrative market after the termination of Western sanctions in accordance with the Joint Comprehensive Plan of Action (JCPOA).