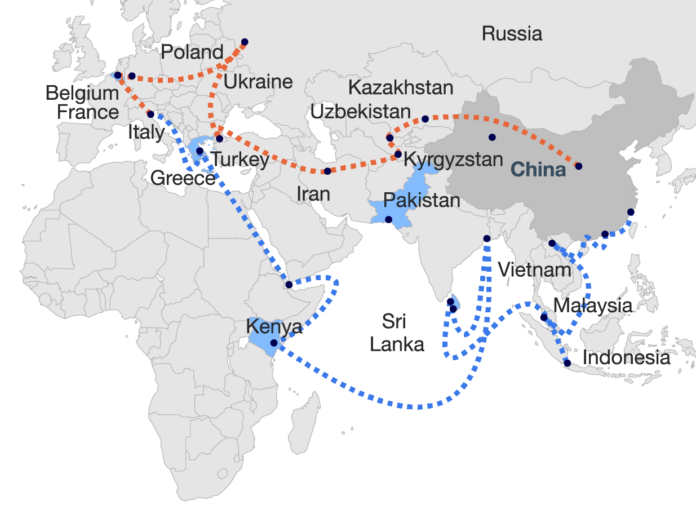 What follows is the full text of Hamidian’s article published by Khabar Online news agency:

The Silk Road, as the most important trade route, has served as a link between the east and west of the world for centuries, running across China, India, Iran, Egypt, Saudi Arabia and Eastern Europe. To secure higher economic growth as well as new and stable markets for its exports and also in order to supply cheaper exports, Chinese President Xi Jinping proposed the idea of reviving the Silk Road under an initiative called “One Belt, One Road” in 2013. In this proposal, Iran is one of the countries that Beijing has an eye on due to the numerous features the Islamic Republic enjoys. After the initiative was put forward, different countries showed various reactions. India is one of the countries opposing the plan basically due to the China-Pakistan Economic Corridor (CPEC) project. The corridor is one of the most important parts of China’s “One Belt, One Road” initiative and runs across the disputed Kashmir region, which is claimed by both India and Pakistan, but is currently under Islamabad’s control. The United States is another country which might go into action if it sees its interests are at stake due to the initiative. The US and China have extensive trade relations. The economic growth of China and that of the US are interdependent. American firms have invested in China, which, in turn, needs America’s technologies as the Asian nation is lacking in state-of-the-art knowhow. Therefore, the economic growth of China and that of America are inextricably intertwined, and the US will not interfere as long as China’s political growth does not pose a threat to US politics.

Three possible routes have been envisioned for the Silk Road: The first route is China-Pakistan- Gwadar, the second one China-Russia-Europe and third route would cross China, Turkmenistan, Iran and Turkey. As the shortest route is the one passing through Iran, the country should seize the opportunity and make the most of it by closely monitoring the situation. Due to the following reasons, Iran is one of the key options for the plan.

Iran has sea borders with 15 countries. Also, a large part of the most important international corridor which links northern Europe, Scandinavia and Russia to countries in the Persian Gulf region, Indian Ocean and Southeast Asia, passes through Iran. This shows Iran used to lie on the transit route and would take advantage of it.

With its rich petroleum and natural gas reserves, Iran is a key supplier of crude oil to China. If the new Silk Road runs through Iran, this demand will increase, and Iran will need to seize the opportunity to maintain the market for its oil exports and at the same time process petroleum products to meet other demands in the project. As a founder of the Asian Infrastructure Investment Bank (AIIB), Tehran has somehow won China’s backing for the Silk Road route to run through Iran.

Although Iran has suitable conditions to lie on the route, there are impediments to that as well. Among the key hurdles are the problems with road, rail and air infrastructure, which does not measure up to international standards. To remove the obstacles, Iran needs massive investment by the private and public sectors as well as foreign loans. The link between Iran’s private sector and other regional countries will the set the stage for trade with Iran. Another hurdle which will create problems for Iran both during the implementation of the initiative and afterwards is the high end-cost of domestically produced commodities compared to foreign goods. Given Iran’s dependence on oil revenues and existence of the Dutch disease, the country’s non-oil exports will have high costs and will be unable to compete on world markets. If this problem is not solved, Iran will not be able to take advantage of the opportunity that it would get due to the Silk Road.

If the Silk Road does run through Iran, the country will face opportunities and threats. The most important advantages for Iran lying on the Silk Road will be higher economic growth, securing regional trade, receiving new demand and creation of more job opportunities, provision of goods at lower costs, prices becoming more competitive, industrialization and modernization, development of the tourism industry, reinforcement of security and the war on terrorism, preservation of natural habitats which lie on the Silk Route, a rise in cultural exchanges, securing the market for goods such as carpets, handicrafts, pistachios, saffron, medicinal herbs, etc. in accordance with international standards, identifying the tastes of consumers and the creation of international as well as Iranian brands, gaining access to cutting-edge technology, and so on and so forth.

While having an eye on the above-said advantages, Iran should openly and farsightedly monitor the situation in order to get connected to China’s economic belt while preserving its strength. One of the dangers threatening Iran is its cybersecurity as China has one of the most sophisticated cybersystems in the world. Iran should also remain on the watch for the Orient’s domination over the country and utilize the advantages of the East while maintaining its Western trade rivals and keep cordial relations with them. All of the above require national determination and giving more leeway to the private sector. By ensuring further stability and security, the Iranian government can boost foreign investment, so, by taking advantage of the Road Silk initiative, Iran will be able to achieve the goals it has envisioned for the country.