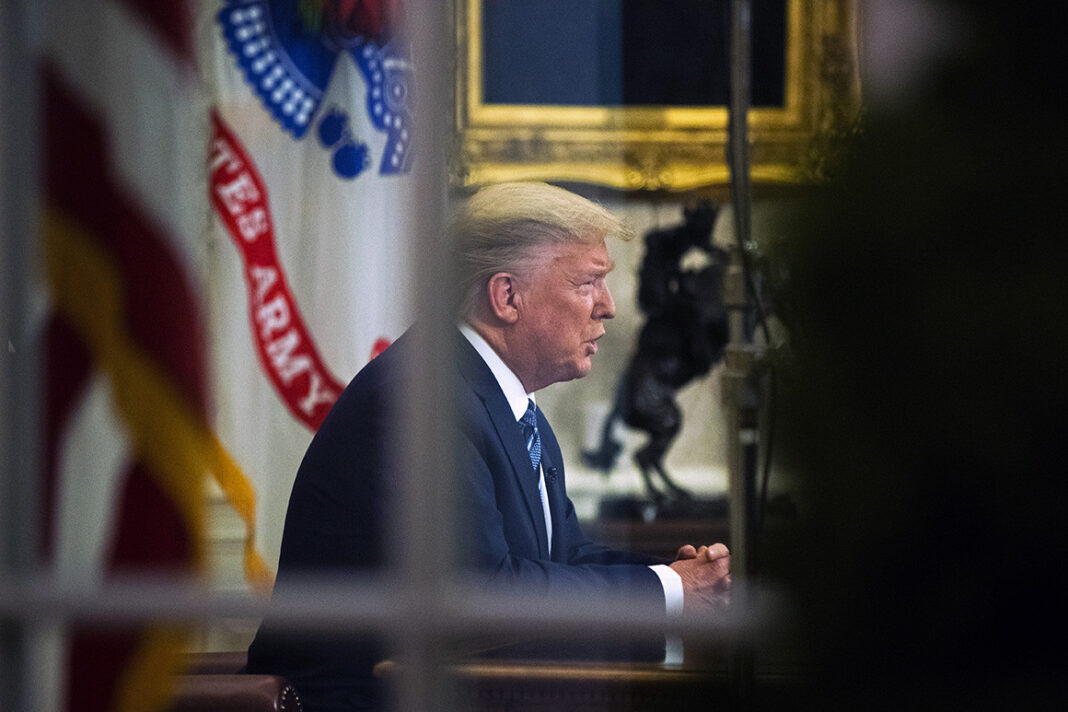 In the US Senate, Many Republicans hope former President Donald Trump would not run for the White House in 2024. Trump has suggested only a "bad call from a doctor" would prevent him from seeking another White House bid.

These GOP senators definitely don’t want to see Trump announce a bid before the 2022 midterm elections, fearing that could sink their hopes of winning back the Senate.

More broadly, they’re generally reluctant to see him on the ballot in 2024 at all because of his track record with independent and swing voters.

“I think we’re better off when he’s not part of any story,” stated a Republican senator, who noted his view is widely shared in the GOP conference.

“He’s a clinical narcissist. He threw away the election in the debate with [Joe] Biden and he threw away the Senate out of spite,” the lawmaker added, referring to Trump’s first against Biden, which many Republican senators viewed as a disaster, and his influence on Republican voter turnout in the Georgia special election.

One thing is crystal clear: Most GOP senators think Trump announcing a bid before the midterms would hurt them.

“The 2022 election ought to be about the Biden administration and its rolling disasters so anything that would detract from the public being focused on what Democratic governance is doing to this country would be ill-advised,” said Sen. Ron Johnson (R-Wis.), a Trump ally, when asked about the possibility Trump could announce his campaign in the next year.

Johnson, a top Democratic target next year, hasn’t decided whether to run for reelection, but expects Democrats to make the Wisconsin Senate race all about Trump.

“That’s what they always want to do. They want to distract and most of the mainstream media will be trying to do that as well. We need to focus — not only Republicans but the country needs to focus on what a disaster the Biden administration has been,” he added.

Republicans feel good about their midterm chances if the race is focused on President Biden’s agenda and record, given his softening job approval ratings.

Another Republican senator whose seat is up for reelection in 2022 said Trump’s reemergence as a candidate would be a gift to Democrats who want to make next year’s midterms about Trump, regardless of whether he announces a 2024 presidential campaign.

“The way my colleagues see it, he’s an asset in the primaries if he’s with you and then it creates challenges in the general election,” said the lawmaker, adding, “He’s different than any political person that I’ve ever known.”

Trump remains a big topic within the Senate GOP conference — and a bit of a mystery. The senator stated Senate Republicans discuss Trump from time to time among themselves and none of them have any idea of whether he’ll really run or not.

Some GOP senators predict Trump will run because he craves attention and has a good chance of winning the party nomination in 2024. Others think he doesn’t want to risk losing again to Biden or may not be healthy enough to wage another grueling campaign.

Former Speaker Newt Gingrich (R-Ga.) recently met with a group of senior Senate Republican staff and suggested that Trump would like to run but would only do so if he felt healthy enough for the rigors of the campaign trail and office.

One Republican senator who certainly doesn’t want to see Trump win the nomination in 2024, say GOP colleagues and aides, is Senate Minority Leader Mitch McConnell (R-Ky.), who this week was attacked again by the former president over his debt-ceiling strategy.

McConnell has steadfastly refused to acknowledge Trump’s attacks or mention him by name.

Many Senate Republicans blame Trump for the loss of their majority.

Democrats won upset victories in both of Georgia’s Senate races in January after Trump publicly questioned whether the state’s voting practices were rigged, which damped GOP voter enthusiasm ahead of the run-off election.

As a result, Senate Republicans weren’t thrilled to read last week’s story in The Washington Post that Trump wanted to announce his 2024 campaign and had to be talked out of it by his political advisers.

Thune is up for reelection in 2022 and Trump has called for South Dakota Gov. Kristie Noem to challenge him in a primary.

Sen. Lindsey Graham (R-S.C.), Trump’s closest ally in the Senate who golfed with the former president a few weeks ago, told The Hill he’s “champing at the bit to get in the race”.

But Graham acknowledged there could be a downside to announcing his presidential bid early.

“The sooner he gets in, the more they can attack him but also the more money he can raise,” he said.

“I’ve been pushing the idea that a Draft Trump movement would be well received,” added Graham, one of the few Republican senators publicly endorsing another Trump White House bid.

“I think he was a good president on the things I care about,” he said, adding, “He’s going to have to deal with the problems in 2020 but, yeah, I think he’d be the most viable candidate right now.”

Trump has other fans in the Senate GOP conference such as first-term Sens. Bill Haggerty (R-Tenn.) and Tommy Tuberville (R-Ala.), but they appear to be in the minority among Republican senators.

A senior Senate GOP noted many Republican senators view Trump as a potential liability in 2022 and 2024.

“Everybody would prefer he wait until after the midterms. We lost Georgia because of him,” the aide said, adding, “Once we got into a run-off, Trump said your vote isn’t trusted and don’t vote so it’s no surprise that we lost.”

“If Trump decides that he needs to get back in now, then it’s all about Trump all the time,” the aide warned.

Nearly half of Republicans want Trump to run for office again in 2024, according to a survey by the Pew Research Center released Wednesday.

The survey showed that 67 percent of the Republicans and Republican-leaning independents said “they would like to see Trump continue to be a major political figure for many years to come” and 44 percent would like to see him run for president again.

Twenty-two percent of those respondents would prefer to support a different candidate who held views that aligned with the beliefs of the former president.

About a third of Republicans, or 32 percent, said they would not like for Trump to maintain his status as a major political figure, according to the survey.

The percentage of people who would like for Trump to remain in the major political spotlight has increased by 10 points since a survey taken in the immediate aftermath of the Jan. 6 insurrection at the Capitol.

The Pew poll follows a recent survey of Iowa residents that showed 53 percent approve of Trump, an important group to consider as the first-in-the-nation Iowa caucuses could be an important factor in Trump’s possible 2024 campaign.