Reopening of British embassy; a game of ifs and buts 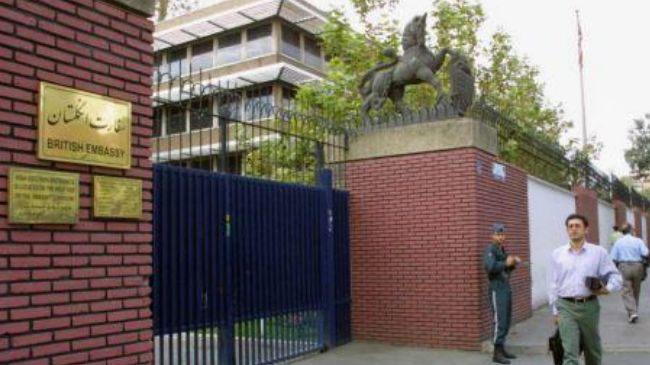 An Iranian MP says that the British embassy is likely to reopen by March 2015 amid ifs and buts surrounding the shaky relations between Tehran and London.

Etemad newspaper ran a report on December 6 by Ehsan Badaghi on ifs and buts surrounding the reopening of the British embassy in Tehran, citing an Iranian MP as saying that the mission is likely to resume its operations by March 2015. The following is the partial translation of the report:

A new layer of paint coated the tacky gate of the British embassy in Tehran in August, giving a new face to it. But it has so far failed to change the official tone between Tehran and London which soured even further in November 2011.

It was a few months ago, in early August, when strong rumors swirled around the possibility of the reopening of the British embassy in Tehran. Although officials on both sides declined to fix a date for the reopening, they agreed that it would happen “shortly”.

Almost five months on, ties between the two countries have yet to see any practical change. Although a historical meeting between Hassan Rouhani and British Prime Minister David Cameroon on the sidelines of the 69th annual session of the UN General Assembly was a turning point in post-revolution Tehran-London relations, it did little to open the padlocked embassies in Tehran and London. “By yearend” [March 21, 2015] is the possible date the co-chairman of the Iran-UK parliamentary friendship group has floated for the unlocking of the two closed doors.

What Abbasali Mansouri Arani told the Young Journalists Club on December 5 about the reopening date comes with some ifs and buts. “If the British embassy reopens in Tehran, the problem associated with granting visa should be solved. First the consular part should be activated.”

What seems to be certain is the uncertainty about such an event taking place. Tehran-London ties have been battered by some storms over the past four years. An attack on the British embassy in Tehran in November 2011 was followed two years later by a trip to Iran by a British parliamentary friendship group chaired by the ex-foreign secretary Jack Straw. And the historic September meeting in New York between the two countries’ heads of government, the first in 35 years, took place less than a year later.

Those who stormed the British mission in the Iranian capital still stick to their guns saying that what they did back in 2011 was correct. The other side of the coin shows that those who are pushing for the normalization of ties believe that Iran’s national interests will be better served if tensions in relations between the two nations are eased.

These two groups go to great lengths to determine the policies adopted in dealing with the UK, a permanent member of the UN Security Council. The group favoring better ties held no sway in the country’s political decision making when the British embassy came under attack in 2011.

Things have changed now. The government and the executive institutions are controlled by this group which has some sympathizers in other institutions including in parliament where Mansouri, an Iranian MP, who hosted Straw one year ago, speaks in favor of the normalization of ties.

Straw’s trip to Tehran came six months after the government’s critics warned that they would not allow the former British foreign secretary to enter the chamber if he attended President Hassan Rouhani’s inauguration.

The latest update on embassy reopening provided by Mansouri said, “In accordance with the talks the two sides have held, Iran and the UK are to reopen their embassies.” […]

He went on to say, “We have no problem with the embassy reopening according to protocols. For us, Britain is no different from France, Italy and other countries. The two sides are waiting to see when the stage is set for the reopening.

An eager government and circumspect critics

Government officials have openly displayed willingness for the normalization of ties between Iran and the UK. That the image of Iran’s foreign minister shaking the hand of the US secretary of state is no longer a strange sight leaves no doubt that the eleventh government has put top on its agenda efforts to ease tensions with countries such as Britain – ties with whom are not part of Iran’s red lines.

A landmark meeting between Hassan Rouhani and David Cameroon in which the Iranian president underscored the need for a rise in foreign investment in Iran – where big economies such as Britain can claim a big share of foreign investment – is yet another sign of Iran’s willingness for resumption of normal ties with the UK.

In spite of this, the critics can resort to a parliamentary decision on downgrading Iran’s ties with Britain from an ambassadorial level to simply having charge d’affaires. That will leave the government very little room to maneuver.

The point is that those who have passed the motion are divided over what the government should do to execute the legislation. On the one hand, Alaeddin Boroujerdi, who chairs parliament’s National Security and Foreign Policy Committee, has said that the law is still holding, and on the other hand, Hossein Naghavi Hosseini, the spokesman of the same committee, has said, “To allow the reopening of the British embassy, the government does not need legislative measures.”

He has argued that the parliamentary act (adopted on November 23, 2011 by the eighth parliament) obliged the cabinet to downgrade ties with the British government, but the government was not given enough time to implement the act due to public reactions.

The act entails an article which authorizes the government to reestablish ties with London at a consular level if it finds out that London has learned a lesson and acts in the framework of its diplomatic and consular duties, he further said, adding that’s why the government needs no parliamentary go-ahead.

Still in contention is the issue of damages. Although Iran has accepted to pay compensations for the damage the mission sustained as a result of the attack under the Vienna Convention [on Diplomatic Relations which gives immunity to diplomatic premises], some members of the Iranian parliament have said Iran should offer no apology to the Britons.

Deputy chair of the National Security and Foreign Policy Committee Mansour Haghighatpour has even gone further saying, “It is very big of Iranians to let the Britons reopen their embassies.”

But this is not all. To reopen its embassy, Britain is expected to meet another condition: issuance of visa in Tehran.

With all being said, it will be clear by yearend if the upsides of the normalization of mutual ties could help remove the hurdles standing in the way, or a new chapter of ifs and buts will open in relations between the two nations.

Footer: On November 27, 2011, Iranian MPs passed a motion to downgrade diplomatic ties with the UK, in response to Britain’s decision to impose new sanctions against Iran. Following the decision, hundreds of Iranian students staged a protest outside the British embassy in Tehran, pulling down the UK flag and demanding the expulsion of the British ambassador. On November 30, London cut off its ties with Tehran, withdrew its diplomatic staff from Iran and the Iranian embassy in London was closed.
› Subscribe
Share
Facebook
Twitter
ReddIt
Email
Print
Telegram
WhatsApp
VK
LINE
Viber