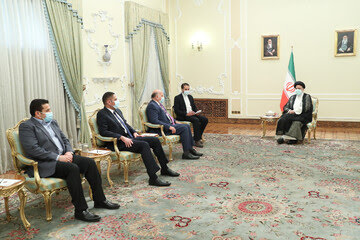 Speaking in a Tuesday meeting with Iraqi Foreign Minister Fuad Hussein in Tehran, Raisi thanked the Iraqi Prime Minister for inviting him to attend the summit of Iraq’s neighbours, and said, “Iraq’s move to hold this summit is a very good one.”

Hussein, in turn, handed over the invitation of his country’s Prime Minister to Raisi and called the holding of the summit of Iraq’s neighbouring countries a step in support of the political process and economic development of the country.

“This summit is a step towards laying the cornerstone of a collective action of the countries of the region to create lasting security in the region,” he noted, referring to a summit where both Iran and Saudi Arabia are to be invited.

Noting that lasting security in the region would not be possible without the presence of Iran and Iraq, the Iraqi Foreign Minister said, “Holding this meeting will create a basis for dialogue between the countries of the region in order to reach a collective understanding in the region”.