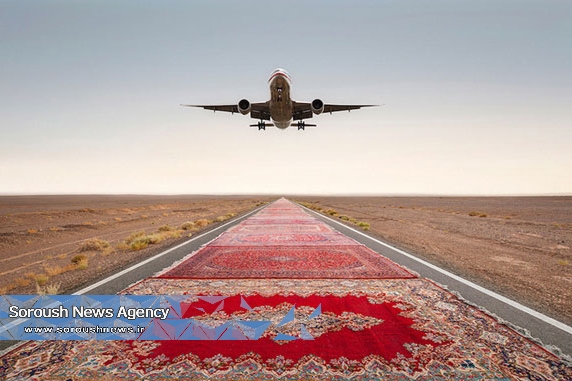 An Iranian photographer has launched a creative project named “The Red Region” by taking photos of Iranian carpets in the heart of Iran’s deserts and seas.

Jalal Sepeher, a well-known and self-trained photographer who has been working on a project on Iranian carpets, has made a creative change in his project by taking photos of Iranian carpets in an empty and dry desert.

In his new project, the photographer has taken various photos of Iranian carpets in a dry desert under a cloudy sky, according to a Farsi report by the Soroush News Agency.

Art experts view the project as a reflection of the chaos underway in the Middle East. In this project, the Iranian market is depicted against the backdrop of endless deserts and roads leading to nowhere under a cloudy sky.

In one photo, an Iranian carpet has been spread on a road with a deep pit in the middle. In another photo, a huge stone has fallen on the carpet.

In a photo, a sand storm is seen at the backdrop threatening the security of the Red Region. In a photo, a family is seen standing on the carpet looking at the horizon, maybe thinking about migration.

The elements used in the collections including an airplane over the sky imply concepts like migration, instability, threats and insecurity which are spreading across today’s Middle East.