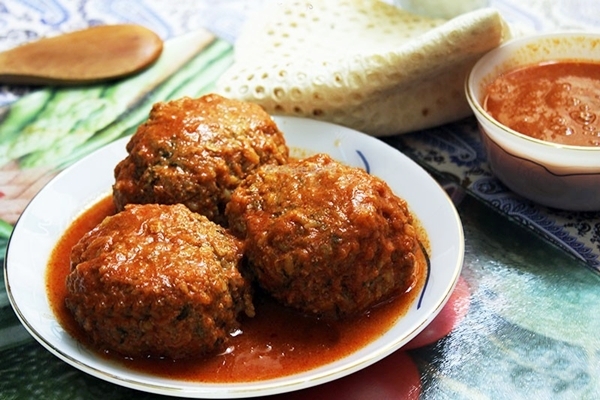 At first glance, the yummy stuffed meatballs whose filling can undergo changes to fit different tastes might seem difficult to cook, but once you get the hang of the dish, you cannot let go of it. 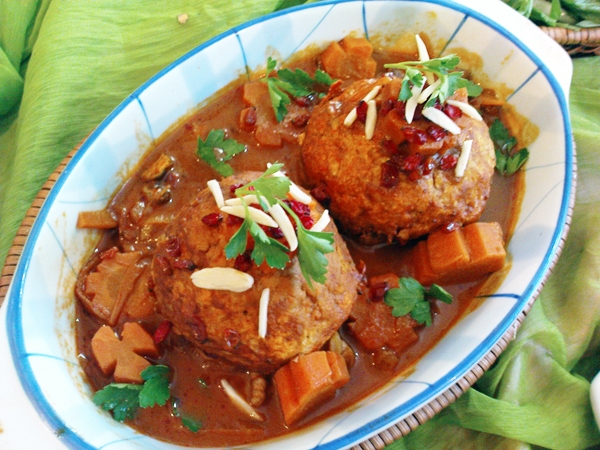 Dried herbs can be used instead of fresh ones.

14. Dried plums and walnuts for the filling

How to cook Koofteh Berenji

1. Wash the rice a few times and soak it in salt water for a few hours. Pour some water in a pot and bring it to the boil, then add in the rice to the boiling water; leave it there until the rice is partly cooked. Depending on the kind of rice, it might take a few minutes (less than 10). Afterward, drain the rice. If the rice turns out to be fully cooked, there is no room for worry. What matters is that rice should not be raw, because it might later cause your Kooftehs to fall apart or remain uncooked by the time the meal is expected to be ready.

2. Cook the yellow split peas in water with some salt as well until they are well cooked. Drain them too and set them aside. The ingredients should be free of any excess water before they are mixed, otherwise the mix won’t be sticky enough and cracks will appear in Kooftehs.

3. Before you make Kooftehs, you need to get the sauce ready. Peel and slice one large onion and fry the slices over a medium heat until they turn soft and golden brown, add salt, turmeric and pepper to it. Then spoon in the tomato paste and fry it until it starts to change color and becomes deep red; stir it frequently to avoid burning it. Afterward, pour three to four glasses of water into the pot; the water level should be high enough to submerge the Kooftehs when they are placed in the pot. Bring the sauce to the boil, as soon as you place the Kooftehs in the sauce, turn down the heat.

4. Grate the other onion. If the grated onion turns out to be watery, squeeze it to get rid of the excess juice.

5. In a large bowl, mix the grated onion, minced meat, rice, yellow split peas, herbs, chickpea flour and egg and add turmeric, black pepper, salt and garlic powder to taste. It is important that you press the mixture with your hands until the ingredients form a single smooth, consistent substance.

6. Take a handful of the mix, stuff a dried plum and walnut into it and then shape it into a ball. Add the Koofteh to the sauce. You should not put the lid on the pot. Turn the Kooftehs in the pot to let them cook well in the sauce. If you like, you can add some dried plums to the sauce as well. As for the filling, you can use other stuff like dried onions, barberries and boiled eggs, too.  The Kooftehs will need about an hour to simmer in the sauce before they are ready. The dish is served with flat bread.