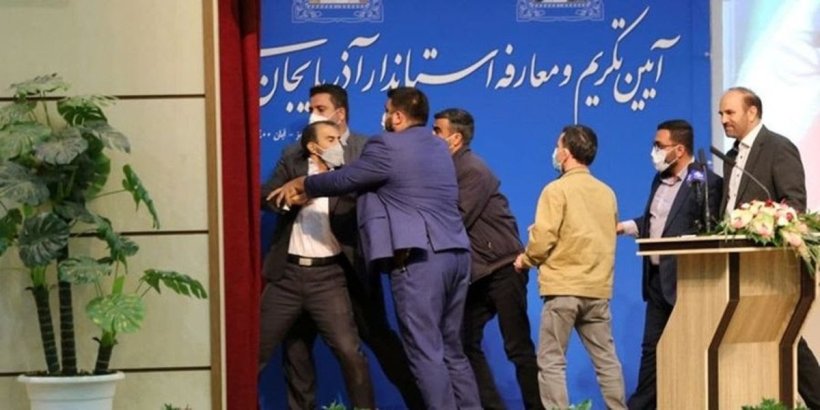 Reactions are pouring in after the new governor general of the Iranian Province of East Azerbaijan was slapped in the face during his inauguration ceremony on Saturday.

“The identity of the assailant has been determined and the matter is being investigated,” he noted
Meanwhile, the East Azerbaijan’s Ashura Corps of the Islamic Revolution Guards Corps has issued a statement calling on responsible bodies to take legal action against the assailant so that such incidents will never happen again.

The statement appreciated the efforts and bravery of Brigadier General Khorram during the Iran-Iraq war in the 1980’s and in the fronts of Islamic resistance and the field of public service, as well as his gracious behavior in Saturday’s incident.
Khorram was at the podium just minutes into his speech during his inauguration ceremony when the assailant attacked him. The new governor general tried to calm the man who had heavily slapped him.

The ceremony was interrupted and the attacker, who was later identified as Ayoub Alizadeh, was taken away before the session proceeded.

“I do not know the assailant and… I forgive him and I have no complaints against him,” Khorram said.
It is believed that the assailant is a member of the IRGC in the province but his motive remains unknown.

Khorram previously served as commander of the East Azerbaijan Ashura Corps of the IRGC.

He was sent to Syria during the early stages of the foreign-backed war there as a military advisor to help in the battle against terrorists. He was captured by the Daesh terrorist group, but was saved miraculously.