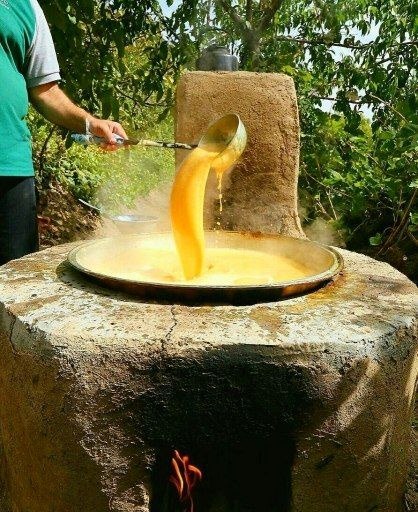 Cooking Doşab or grape syrup has long been a traditional way of preserving the juice of the fruit and its properties in Iran’s northwestern region of Azarbaijan.

People in Urmia and other cities in that area begin cooking Doşab in late September and early autumn when grapes are fully ripe and sweet.

In almost all regions across West Azarbaijan Province where grapes are grown, Doşab is prepared and used at home for baking different meals. Doşab is also mixed with milk for consumption.

Iran’s West Azarbaijan Province ranks fourth in the country in grape production. Doşab is a very good nutrient and has many health benefits. For example, it’s very useful for treating anemia. Also, due to its warm nature, Doşab is good for cold seasons and helps prevent cold and other diseases.

To prepare Doşab, the grapes are first washed properly and poured into a large pan. In the traditional way, Doşab producers crush the grapes with their feet. Then they mix the juice with the soil in a special container. A day later, this soil settles down and at this stage, the juice is poured into a large container. Then the large container is placed on firewood. The juice is boiled for several hours until it reaches the desired strength and is ready for use.