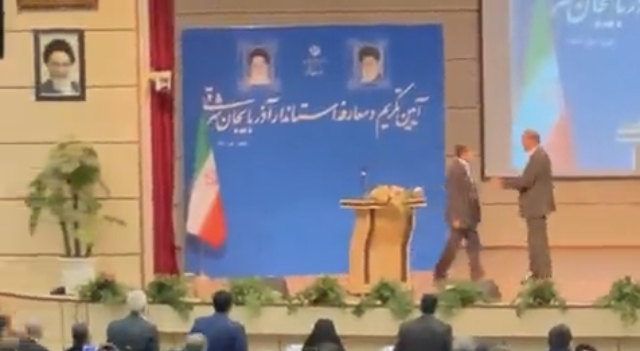 The new governor of the northwestern Iranian province of East Azerbaijan has received a sharp slap in the face by a participant in a ceremony where he was officially introduced as the new provincial governor.

Zeinolabedin Khorram was delivering a speech on the podium when one of the participants stepped up, hit Khorram in the face and pushed him.

The governor maintained his composure and refused to show any reaction. Then security guards intervened and the atmosphere of the meeting returned to normality.

The assailant is identified by his surname as “Alizadeh,” and a staff member of the Armed Forces, who is said to have slapped Khrram and pushed him due to personal grudge.

Later, the provincial governor said he had no complaint about him.

“I don’t know him … I regard him as an enemy, but I will forgive him,” said Khorram.