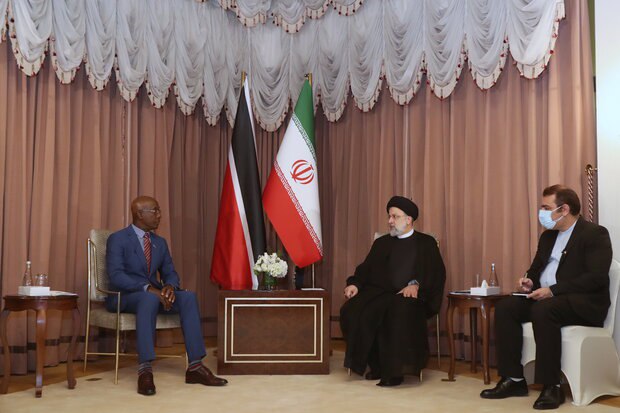 The Islamic Republic of Iran, despite heavy sanctions and the enemy's desire to put pressure on the nation, has been able to acquire good capabilities in various fields, including the oil and gas industry, and it’s ready to share its experiences with Trinidad and Tobago.

Those are the words of Iranian President Ebrahim Raisi during a meeting with Trinidad and Tobago’s Prime Minister Keith Rowley in Qatar.

Raisi also praised the spirit of seeking independence and freedom among nations in Latin America, saying Iran has always supported demands for freedom and independence by all world nations against the oppression of arrogant powers.

While expressing interest in expanding relations with Trinidad and Tobago, the president said at a time when the enemy wanted to shut down Iran’s oil industry by imposing sanctions, the Islamic Republic managed to achieve a high level of technical know-how, which developed its oil and gas industry.

Raisi further referred to the remarks by the prime minister of Trinidad and Tobago about the impact of US sanctions on his country’s interactions with other Latin American countries.

He said this is further proof of US oppression and arrogance.

Keith Rowley also noted that his country is rich in hydrocarbon resources and said Trinidad and Tobago, like Venezuela and Cuba, seeks to expand its relations with Iran.

Rowley said Trinidad and Tobago has tried to diversify economic partners and is interested in benefiting from Iran’s experience and capabilities in the field of oil and gas.