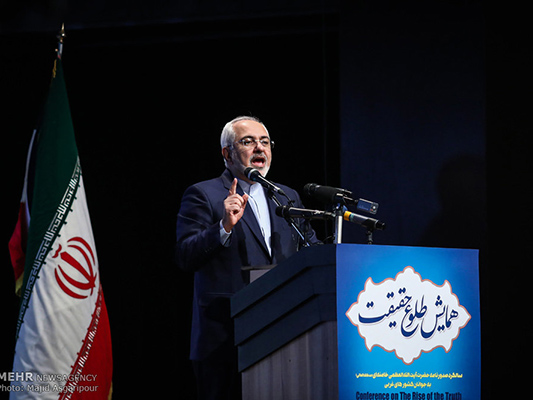 Iranian Foreign Minister Mohammad Javad Zarif has asked Western countries to explain why the people brought up in those countries behead children in the Middle East.

Zarif on Sunday referred to a 2015 letter by the Leader of Iran’s Islamic Revolution Ayatollah Seyyed Ali Khamenei to European and North American youths, and asked, “Why do people born and educated in the West behead children in Iraq and Syria?”

“Why do these people show so much barbarity and brutality? What explanation does the West have for raising them this way?”

The Iranian top diplomat made the remarks in a ceremony held in Tehran to mark the second anniversary of the Leader’s historic letter.

Zarif went on to say that the Leader’s letter addressed Western youths at a time when the medieval and embarrassing phenomenon of ISIS was spreading in the world.

However, he added, Islamophobia started long before the emergence of ISIS.

“Today, Islamic terrorism is among the keywords used by the US president in his speeches,” he noted.

“This is while they themselves are the creators of the threat of Islamic terrorism (ISIS), and are hiding themselves behind what they have made.”

“Now that we see English-speaking Westerners are beheading children in Iraq and Syria, for which the West should be held accountable, we need to take a different look at the Leader’s letter,” Zarif noted.

“The Leader’s letter to Western youths addresses the young generation, because the youths are the only ones who can find solutions to the current problems,” he added.

“The recent developments in the world should be viewed with a common global concern,” he said, adding that the Letter should be investigated with an exploratory view.