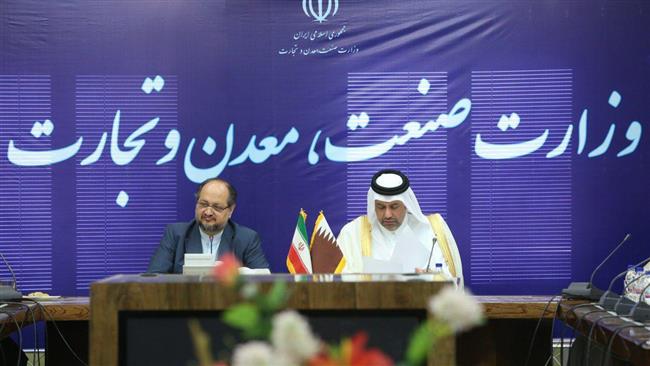 Iran says it had received a proposal from Qatar to increase the level of trade between the two countries by five folds.

The announcement was made by Iran’s Minister of Industry, Mines and Trade Mohammad Shariatmadari after a meeting with the visiting Qatari Economy Minister Ahmed bin Jassim al Thani.

Shariatmadari said the current level of annual trade between the two countries stood at below $1 billion, emphasizing that Doha had informed Tehran through al Thani about a proposal to increase this to as high as $5 billion per year.

He further said Iran and Qatar had been able to expand the level of their trade relations by 120 percent over the past months, expressing hope that this would increase further in the future.

Al Thani, for his part, said Iran had a crucial role over the shipments of goods from other countries including Turkey and Azerbaijan to Qatar since the Saudi-led blockade against Doha became effective.

He also expressed satisfaction over a rise in exports of Iranian products to Qatar particularly food items and construction materials over the past months.

Saudi Arabia and its allies including the UAE, Bahrain and Egypt severed ties with Qatar in early June over charges that it supports terrorism. They have accordingly imposed a land, sea and air blockade against Qatar thus leaving only a sea and air corridor open with Iran.

This created a rise in Iran’s exports – particularly fruits and vegetables – to Qatar over the past months. Iran has also become a corridor for exports of other countries to the blockaded Persian Gulf state.