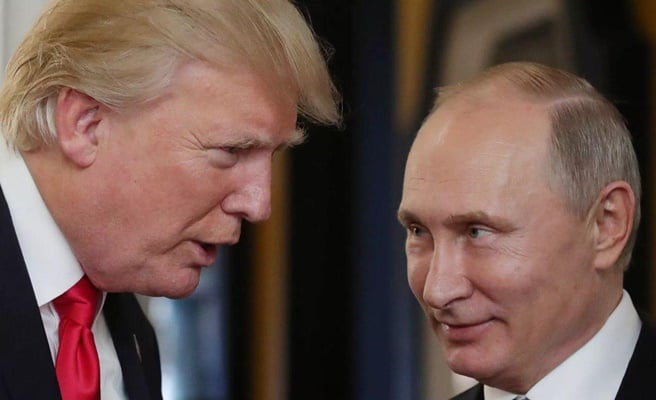 The Russian president’s special envoy on Thursday briefed Iranian officials on the details and results of the recent summit between Russian President Vladimir Putin and his US counterpart Donald Trump in Helsinki.

In a meeting held in Tehran, Alexander Lavrentiev held talks with Saeed Iravani, the deputy secretary of the Iranian Supreme National Security Council for foreign policy and international security.

During the talks, the Russian representative presented a comprehensive report on the negotiations held in a recent summit between Trump and Putin.

The Russian official said Moscow has committed itself to supporting international agreements and urges countries to refrain from unilateralism and using economic and trade tools to impose their political will on other nations.

Lavrentiev touched upon the Kremlin’s transparent and firm position on the Iran nuclear deal, and said Russia regards the imposition of unilateral sanctions against Iran as a violation of this international agreement. He said the Russian president reminded Trump in their meeting that Washington’s sanctions are unconstructive and detrimental.

He expressed hope that continued talks by China, Russia and other European countries with the United States will make the White House change its stance with regards to unilateral policies. He also hoped that already agreed deals within the framework of the JCPOA will serve as the basis for further action.

He also stressed the need for Iran and Moscow to press ahead with their political and security cooperation in Syria.

He said the Russian government’s determination to continue joint work to combat terror has not been undermined, and the two countries will continue to move on the same path until stability and security are fully restored to Syria.

Iravani, in turn, expressed his gratitude to the Russian president for immediately sending a special envoy to Tehran, and described the move as a clear sign of both countries’ compliance with the rules of mutual cooperation and strategic collaboration.

“The Russian president’s fundamental and firm stances on the United States’ unilateralism and breach of promises show Russia’s commitment to international regulations and the logic of talks and understanding in order to tackle political and security challenges,” said the Iranian official.

Iravani appreciated Russia’s abidance by and support for the JCPOA as well as its non-stop efforts to [help] fulfil the commitments undertaken by other signatories to this international agreement.

“As stipulated in numerous reports of the International Atomic Energy Agency, the Islamic Republic of Iran has lived up to all of its obligations under the JCPOA and believes the continuation of this trend is contingent upon the securing of Iran’s legal rights and the fulfilment of the obligations undertaken by the other countries which are parties to the deal,” he said.

Elsewhere in his remarks, he touched upon the recent developments in Syria. He recalled the gains made by the Syrian army and popular forces in the south with the support of countries which are members of the anti-terror coalition.

“The recent achievements are a key step toward promoting the political process within the framework of the negotiations in Astana and Sochi,” he said.

He noted Iran believes it is very important to keep pursuing a political solution to the Syria crisis while boosting the trend of intra-Syrian talks, and supports efforts made in that regard.

Iravani noted the level of Tehran-Moscow cooperation shows the negative moves by the Israeli regime as well as its hit-and-run actions have no bearing on Iran-Russia cooperation, and that the two countries will continue to reinforce Syrian armed forces in the war on terror within the framework of the current coalition.