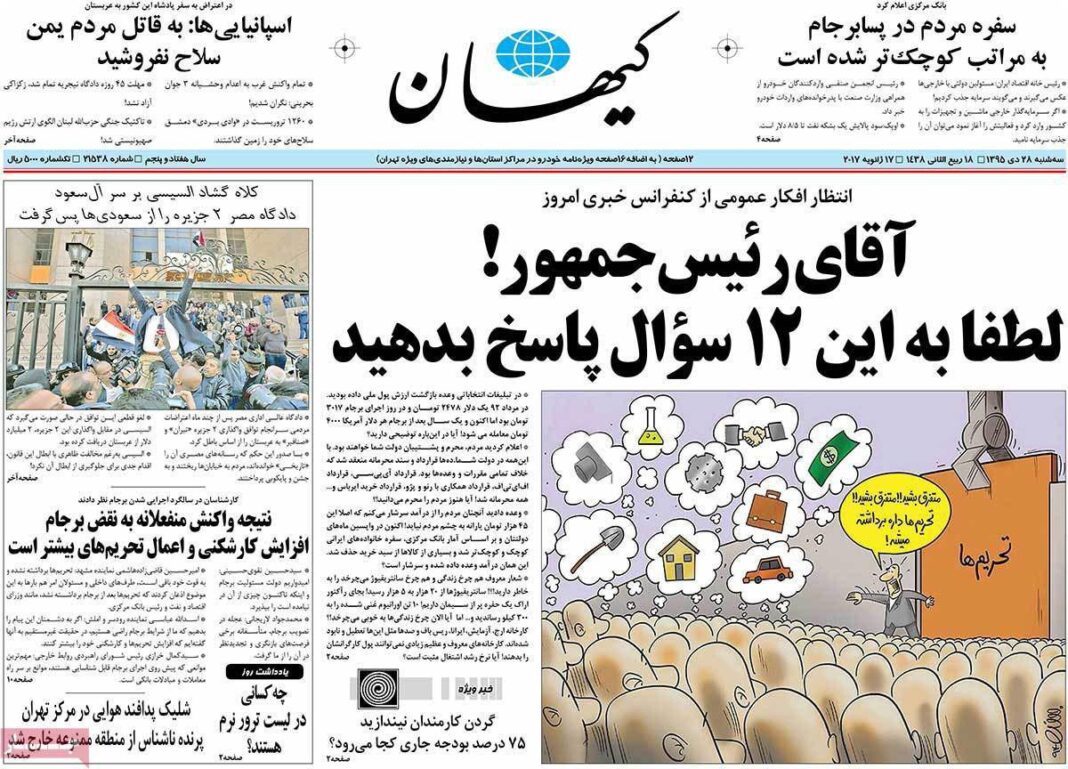 The leading conservative newspaper Kayhan has called on President Hassan Rouhani to answer 12 questions in his Tuesday press conference.

President Rouhani is due to answer the questions raised by journalists in a press conference on Tuesday afternoon in Tehran.

“Apparently, the press conference is being held on the pretext of JCPOA implementation’s first anniversary,” Kayhan said in its Tuesday report, predicting that the questions raised by journalists will not be answered as President usually spends the majority of time in his press conferences delivering his speech.

However, Kayhan added, public opinion has its own questions and looks for answers to them.

The conservative newspaper has raised 12 questions, which it says are the current problems of Iranian people, and asked Rouhani to answer them in his Tuesday press conference.

Its first question deals with Rouhani’s campaign promise to bring back the lost credit to Iran’s national currency. It highlights the decreasing value of Iran’s rial and asks Rouhani to explain why dollar rate has surged.

As the second question, Kayhan refers to Rouhani’s remarks in praise of US President Barack Obama’s intelligence and politeness, and asks him whether he is still holding the same opinion even though Obama extended anti-Iran sanctions and the state of emergency. “Is he still a polite man in your opinion? If so, what should he do to seem impolite to you?”

In its third question, Kayhan points to Rouhani’s campaign promise not to hide anything from Iranian people, and asks why his government signed several secret agreements and contracts, including IPC [Iran Petroleum Contract], FATF [Financial Action Task Force], and even deals with Peugeot, Renault, and Airbus, without letting the nation know about their details.

In the fourth question, the conservative paper reminds Rouhani of his promise to promote the validity of Iranian passport, and stresses that the country’s international passport credibility has sharply decreased in recent years. “You even failed to send your designated UN envoy to the US!”

The fifth question deals with Rouhani’s promise to decrease unemployment rate, which according to Kayhan has not been fulfilled. “In some provinces, unemployment rate among young people has risen to over 50%. Do you have any explanation for Iranian people?”

In its sixth question, Kayhan refers to the sharp decrease in people’s purchasing power, and reminds Rouhani of his promise to improve the level of people’s income.

“One of the unforgettable promises you made was Iran’s considerable economic boom and that people’s lives will flourish as Iran’s centrifuges work,” Kayhan noted in its seventh question, highlighting the fact that many major industrial brands in Iran have been shut down and gone bankrupt while Rouhani’s government insists on declaring a positive economic growth rate. “Is there any logical relationship between these statistics and the realities?”

In its eighth question, Kayhan also pointed to the country’s nuclear industry and the decrease of Iran’s centrifuges from 20,000 at the beginning of Rouhani’s term to today’s 5,000. “That day, we enriched uranium up to 20%, while now it is only 3%! That day, we had almost 10 tons of enriched uranium, but now it is just 300kg […]. Mr Rouhani! What did you do to Iran’s nuclear industry? Do you still think Iran’s centrifuges are working?”

Kayhan’s ninth question deals with the issue of housing, and strongly criticizes Rouhani and his Minister of Urban Development for their attacks on former president Ahmadinejad’s ‘Mehr’ Mass Housing Project. “Mr President! Do you have any practical plan, or even something on paper, for people’s housing?”

In the tenth question, Kayhan refers to his campaign promise to be transparent and obey the country’s laws and regulations. It criticizes two ministers for their refusal to disclose their properties based on Iran’s law, and also asks Rouhani about his brother’s alleged corruption.

The eleventh question refers to Rouhani’s remarks before the 2013 election who said 20% of Iran’s problems are caused by sanctions and the rest is the result of mismanagement. “While sanctions are removed as you say, and your elite managers have been in charge in the past four years, why have the country’s problems increased? Were you wrong when you made those remarks and the effect of sanctions was more than 20%? Do you deny the issue of mismanagement in your administration?”

Kayhan’s last question asks Rouhani why the country’s oil income has decreased by 18% while the oil price has increased and the country is selling more oil than the previous government. “Is there another secret of which we should not be aware?”