Prague takes a big step to get closer to Tehran The Czech Republic’s foreign minister has, in an opinion piece, said that Prague and Tehran can work together in many areas, including in the fight against ISIL, and build cultural bridges like in the past. 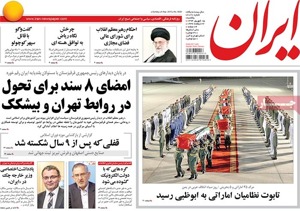 This is the opening of an opinion piece by the Czech Republic’s Foreign Minister Lubomir Zaoralek on the prospects of ties between the two nations. The following is the translation of the piece published in Farsi by Iran newspaper on September 6:

Ninety years ago the two countries [former Czechoslovakia and Iran] established diplomatic ties and 85 years have passed since the two nations signed a friendship pact. These events show that Iran is among the first non-European countries Czechoslovakia established and developed ties with. These deep-seated ties have improved the prospects of my current trip to Iran.

I am the first foreign minister [of the Czech Republic] to visit Iran in many years. I am happy that there is a firm historic reason for my trip and that is to reconstruct the age-old friendship between the two countries. Over the years I have been involved in political activities, I have always believed in working out diplomatic solutions to the world’s problems. That’s why I’m happy to see that lengthy talks between Iran and P5+1 over the former’s nuclear program have finally produced an agreement.

If such an approach is sufficiently employed, it would pave the way for resolving a number of regional issues and would patch up ties among regional nations. Given the conditions in the Middle East and North Africa, this approach is badly needed. Let me tell you about an article I recently read and found interesting. This article – The Imperative of a Comprehensive Strategy to Fight Violent Extremism – was written by my [Iranian] counterpart Mr. Zarif.

I have paid special attention to the shared willingness by the international community to defeat ISIL and all its extremist affiliates, and to remove all symbols of sectarian violence all over the world. It is highly important that we hear such a powerful message from the Islamic Republic of Iran which places emphasis on cooperation against evil forces that are acting in the name of Islam.

I am very happy to say that my country fully agrees with Iran in this regard. The Czech Republic actively supports all efforts which may help defeat ISIL and its violent state in parts of Syria and Iraq. To that end, my country is actively helping [with the fight against ISIL] in different forms such as sending ammunition to the Iraqi government and participating in non-combat projects there. We have also taken different measures to help asylum seekers from Iraq and Syria. The Czech government has always paid attention to efforts to support war-stricken people and help them get access to welfare.

As I said before, I’ve always backed the possible and workable diplomatic settlement of disputes between people and governments anywhere. This is yet another reason why I hope diplomatic ties between the two countries as well as their relations on other fronts will be revived and boosted. It is quite natural for the two countries not to see eye to eye on all issues, but they are expected to talk about all these issues and seek a sustainable, peaceful compromise.

One key way to build and improve ties among world nations and prevent confrontation and war among them goes through activation of economic cooperation. We in Europe know this very well. That’s why a relatively big economic-commercial delegation bringing together representatives from 50 Czech companies which are big industrial names in my country’s long history is accompanying me on this visit.

Their presence reminds us of the fact that the two countries have had good cooperation from the past and that there are areas for them to develop their cooperation. I would like to say that the two countries can cooperate on different fronts, especially public transport, non-military air transport, water treatment and management, medicine, healthcare, medical equipment, agriculture, machinery, mining, construction, science and technology.

For sure, the two sides will have a wide range of options for cooperation and I’m sure that at least a number of them should be developed. In addition to these, let me stress the importance of building cultural bridges between people in these two countries. I would like to express my gratitude to the Iranian government for its support for the Farsi Language and Literature Program at Charles University in Prague. I hope this can reestablish an old tradition of Iranian studies in the Czech Republic’s universities.