The winners of 157 out of 290 parliamentary seats have been determined so far, with the Principalists losing ground to a combination of the Reformists, the Voice of the Nation, and independent candidates.

According to Khabar Online, Reformists have so far secured 34 seats, and independents 35 seats. 7 candidates from the list of the Voice of the Nation are more moderate-leaning, thus cannot be considered as Principalists.

Even if Mohammad Mofateh, a candidate whose name was on all three lists (Reformists, Principalists and the Voice of the Nation), is counted as a Principalist, the faction would still be in a minority.

The following diagram shows the above results quite clearly. 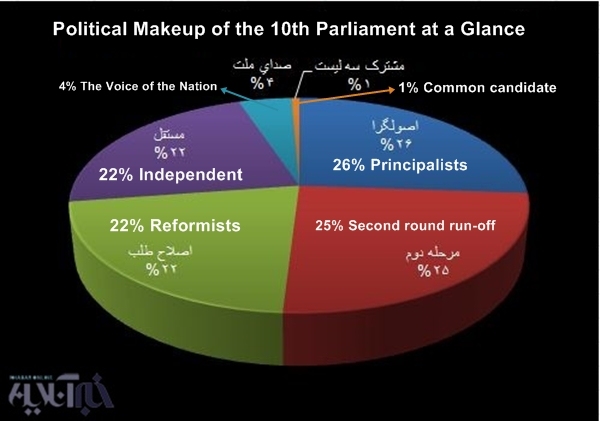 IFP – According to the figures and the diagram released by Khabar Online, a considerable number of the winners of Friday’s Parliamentary elections are considered as independents, ones who did not have the backing of any political faction or party.

If this group maintain their nonpartisan position, they will play a determining role in the forthcoming Parliament. Their votes will be crucial for both Principalists and Reformists in pushing through their bills and spreading their agendas.