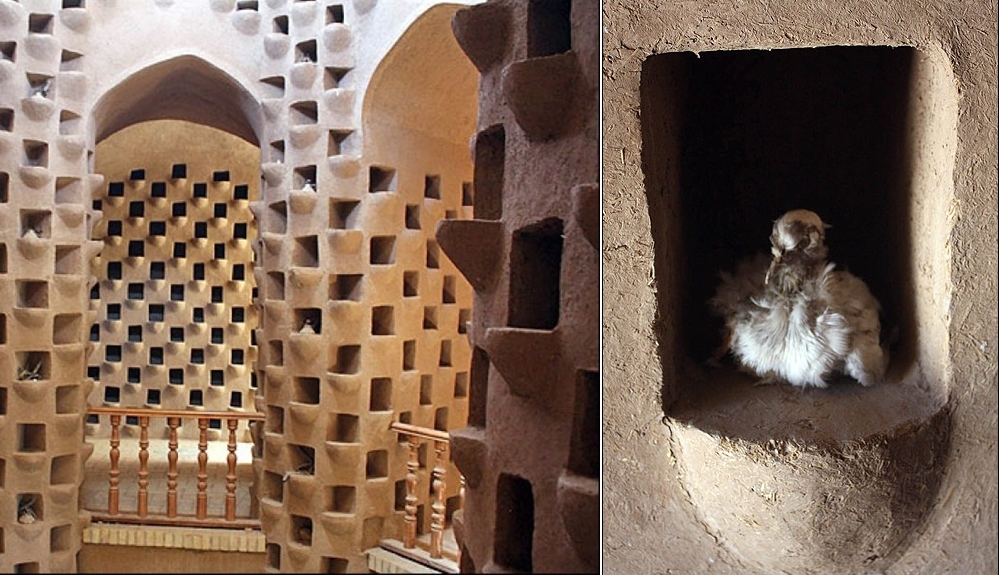 Pigeon houses represent a perfect example of humans and nature working together for mutual benefits.

The Game-keeping and Nature Magazine in its summer issue (July-September 2014) published a report headed “Iranian Architecture in Pigeon Houses”, which revolved around the architecture of dovecots in Iran that have unfortunately lost their status with the advance of urbanization. The following includes a brief look at amazing features of these artistically built structures and a trip down the memory lane to their glory days when many of them still offered safe haven and comfort to pigeons: 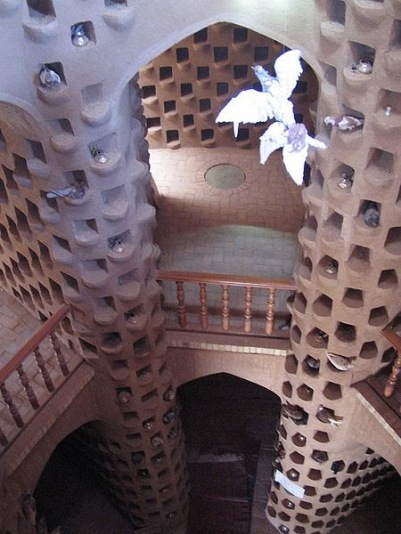 It is an Iranian-designed nest for Iranian pigeons. Iranians did not keep homing pigeons in captivity. In fact, such nests were intended to function as a place of rest and refreshment where pigeons could stay, drink water and peck at seeds and then fly back to the blue sky.

Pigeon houses are fairly large adobe structures built by farmers. They have numerous timbers in their upper section and there is a honeycomb and porous network in the interior which provides birds with suitable accommodation. Their interior architecture is exceptional. These buildings are magnificent thanks to their substantial size, glory and diversity in design. Thanks to careful consideration of climate and biology by Iranian architects, fascinating wonders in the name of pigeon houses appeared on earth, beautiful and terracotta-colored structures which survived long and rightly deserve to be viewed as superior to the Seven Wonders of the World.

Farmers used pigeons as biological pest controllers and collected their droppings as natural fertilizer for their farms. Pigeon manure is rich in nitrogen and thus was used as potent fertilizer in farming and gardening. Also, farmers kept the birds for their eggs. The agricultural method popular with farmers in the suburbs of Isfahan and Yazd shows advanced farming, a method known today as organic agriculture. Biological pest control without the use of chemicals is a main feature of such farming. In the past, pigeon droppings were used in different industries like the process of tanning leather and production of gunpowder. For the very reason, Shah Abbas I (a Safavid dynasty ruler) imposed a rather heavy tax on pigeon houses.

It is an Iranian-designed nest for Iranian pigeons. Iranians did not keep homing pigeons in captivity. In fact, such nests were intended to function as a place of rest and refreshment where pigeons could stay, drink water and peck at seeds and then fly back to the blue sky.

Small and big pigeon houses across Iran offered accommodation to about 1,000-40,000 birds based on their size. The design and function of such structures were so interesting that their architects seemed to have put to use all sciences to attract pigeons and present them with a safe environment. Geometry and mathematics employed to maximize the area of the structure and adoption of aesthetic principles in their design are remarkable.

If, for one reason or another, pigeons get into a panic and thousands of them start flapping simultaneously, the vibrations will hit the cylindrical body of the structure and consequently the intensified waves will result in the collapse of the building. Iranian architects have decreased the column’s effective length and shored up the structure to push down the vibration amplitude of the tower. So if vibrations from the movement of their wings while flying have the same amplitude as the tower vibrations, a change and an increase in the tower’s vibration amplitude will be negligible and the devastating phenomenon of Resonance could be averted. Pigeon houses are among the first manmade earthquake-resistant structures, if not the first ones. 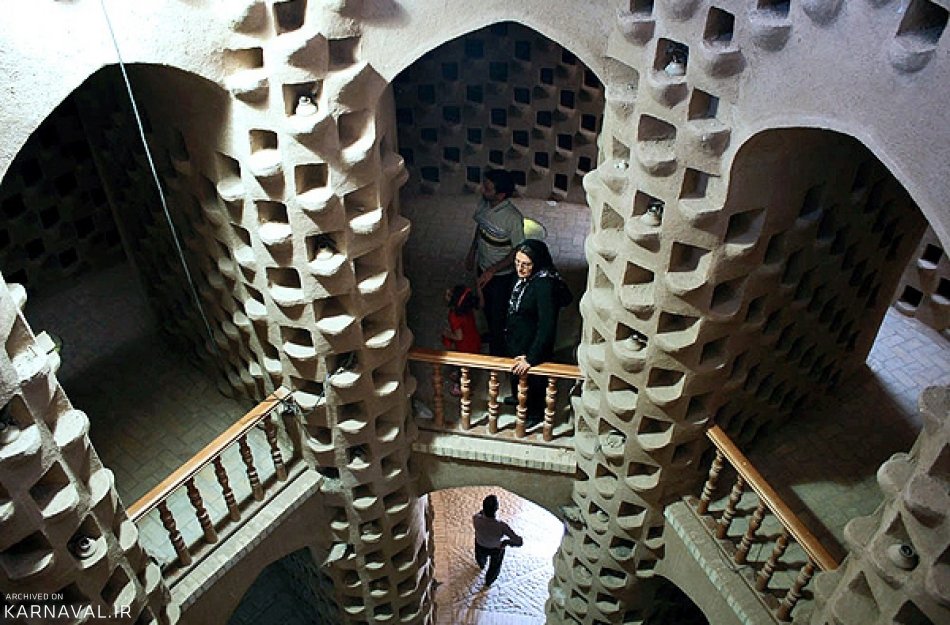 Timbers pass horizontally through the structure and join the opposite walls. Therefore, walls are held firmly together and wide vertical cracks which could lead to the collapse of the tower won’t appear. Pigeon houses are designed and constructed in a way that the least building material and surface area translate into the most efficient use of space and hence the largest number of pigeon holes. Nesting holes are arranged in a way that offer equal access to birds. Besides, all nests are the same in terms of sunlight exposure and ventilation, and pigeons have an equal amount of space to fly back and forth; no pigeon hole has an advantage over another. Nests pierced in the lower levels are the most suitable ones for reproduction, for pigeons need a dimly-lit place for that purpose.

For about 50 cm above the ground, there is no pigeon hole in the tower. Pigeon manure is accumulated in this space and after one year, sealed openings at either side of the house open to let the amassed droppings out. The structure is designed to provide security, peace and comfort to the birds. Pigeon holes made in the domed cupolas known as “pepper-pots” are of a specific external diameter, so they can only allow entry to pigeons and sparrows and deny access to birds of prey.

To attract pigeons and scare predators away, the smell of animals such as wolves and hyenas or of some herbs such as frankincense is used in the building.

One of the most ingenious architectural techniques adopted to keep snakes away from pigeon houses is a coat of stucco around 50-60 cm above the tower base. The smooth, evenly-coated surface prevents their ascent to the nesting holes. This plaster band widely known as “plaster shawl” can be seen in most pigeon houses and what is interesting is that pigeons show more interest in towers that have the plaster band at the base.

Local enforce a ban on hunting within a 500-meter radius of pigeon houses so that the safety of the area can attract more pigeons to such houses.

Unfortunately, with time and outbreaks of rows among estate owners, pigeon houses have been abandoned and their restoration has faded into oblivion. In addition, farmers’ failure to spread seeds, especially in the winter, for the birds has led to their gradual migration from towers, leaving the structures in a state of disrepair. Over the past century, expansion of cities, a rise in population, and sound pollution caused by different modes of transport have left no farm where birds can peck at seeds with peace of mind.