Parting of the ways: Has JCPOA divided principlists? 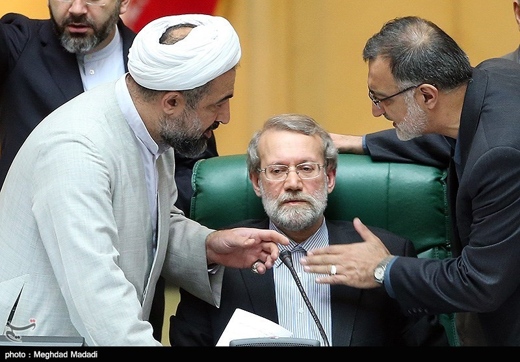 Political analysts say that the Iran nuclear deal has disunited principlists who are characteristically opposed to the way the eleventh government has handled nuclear talks.

A political analyst says that principlists will try in the future to form an alliance and take softer lines on foreign policy issues, and this would naturally split up their two main wings, namely the Islamic Revolution Stability Front and the Followers of the Leader [Rahrovan-e Velayat].

The bill on the implementation of the Joint Comprehensive Plan of Action (JCPOA) finally cleared the Islamic Consultative Assembly, but deep divisions emerged between the two main principlist wings during the parliamentary debate on the JCPOA bill. Their division even went so far as getting physical. This has raised doubts over the possibility of principlists forming an alliance in the next parliament.

Experts say that what happened in parliament during its debate of JCPOA has made it even harder for principlists to form a united front. Fararu.com on October 13 published a report on the rift which has opened up within the ranks of principlists and the outlook of their performance: will the principlists pull together or part ways. The following is the translation of the report which includes the viewpoints of two political experts:

Regardless of divisions among principlists over JCPOA, the nuclear issue has turned into one of the main election issues in Iran. The nuclear program and the impact of JCPOA on the country’s development have been even raised in pre-elections meetings.

What unfolded in parliament on Sunday and Tuesday – during which an anti-JCPOA group was formed in the chamber – caused the issue [JCPOA and its impacts] to turn into a more serious question and helped JCPOA become [the core of] the election debate.

As a result of these developments, a number of principlists who pursue extremism and radicalism in their policies have an outside chance of being included in the broad-based principlist alliance. In the past, not-too-hotly debated political issues created a rift among the principlists, and now the nuclear issue will likely to widen the gap between the hardliners and their fellow principlist groups.

When it comes to JCPOA, it is still unclear who has emerged the winner [the government or the pro-JCPOA principlist group in parliament] and who has become the ultimate loser. I have always talked in favor of JCPOA. I think it is significant because of the threats it withdraws and the opportunities it creates.

But the stage is not set yet to interpret the Iran nuclear deal and select its winner and loser, because the other side, especially the US which is involved in the deal, is also a factor. Infringement of commitments, especially in dealing with Iran, has always been part of US policies.

JCPOA would turn into an edge for Iran if and when it served the country’s national interests, removed the threats and created opportunities. It is premature to judge JCPOA and say that its result will show itself in the upcoming parliamentary elections.

I should say that the likely results – both positive and negative – of JCPOA can be tracked in the next presidential elections. If the government can tap into JCPOA to pursue the country’s policies, it would turn into a trump card for Mr. Rouhani to play in the next elections. But JCPOA, which the government supports, would turn into the Rouhani administration’s Achilles’ heel if the impacts of JCPOA implementation are not felt in the country’s domestic affairs, the economy in particular.

In case JCPOA fails to achieve its stated objectives and kills Mr. Rouhani’s chances of winning reelection, principlists should not be joyful, because what matters most is that JCPOA can leave positive impacts on the country.

The Joint Comprehensive Plan of Action opened up a wide chasm among principlists, with some favoring JCPOA and others, including members of the Stability Front, opposing it.

This shows that there is little uniformity and unity among principlists. Opposition to the reformist camp is the sole thing principlists unanimously agree on, but they are divided over JCPOA or the way they should cooperate with the Cabinet. It does not seem unlikely that their divisions find their way into the parliamentary elections.

It is also likely that in certain constituencies supporters of the government and moderate principlists become united and agree on a number of candidates, but hardline principlists, including the Stability Front, fail to align with fellow principlists.

As a matter of course, this is not unprecedented or something new in Iran. The stage is usually set for the moderate movements to become united, whereas hardline and extremist movements cannot unite even with like-minded radicals.

I think we will witness a rift among principlists in the upcoming parliamentary elections, in certain constituencies at least. In Tehran, the ticket of hardline principlists and that of moderate principlists are likely to share simply a few names.

If the reformists participate in the elections (with leading figures running on their straight ticket), a large number of hardline principlists will not be willing to align with moderate principlists, even if they are assured that their refusal [to align] will come at the expense of losing that [particular] constituency to reformist and pro-government candidates.

[Will JCPOA benefit moderate principlists in parliament in addition to the government?] What is certain is the fact that the popularity of MPs such as Messrs. Larijani and Kazem Jalali is on the rise among people, especially among university students and youth, thanks to their stance on JCPOA. Definitely this will greatly help them in the upcoming parliamentary elections.