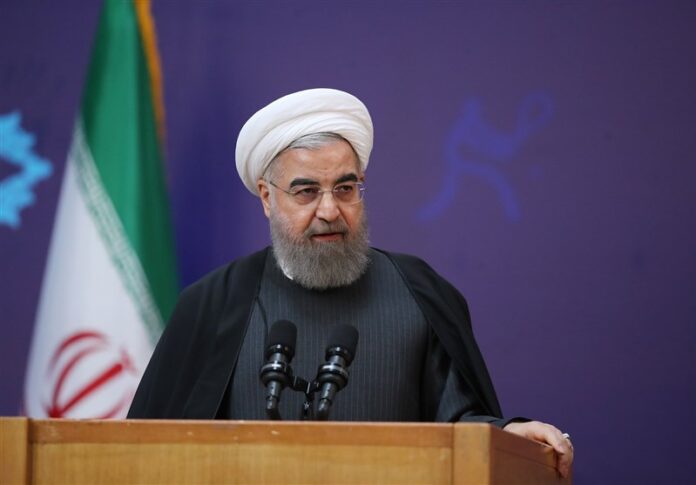 Iranian President Hassan Rouhani referred to nuclear technology as a necessity for Iran, and hailed the country’s diplomatic team who ‘skilfully’ realized the “Nuclear energy is our absolute right” slogan.

Iran’s President Rouhani on Sunday stressed that having nuclear technology is absolutely crucial for the country, saying the constant emphasis laid by the Leader of the Islamic Revolution Ayatollah Seyyed Ali Khamenei on continuing the development of the technology has been just and appropriate.

According to a Farsi report by IRNA, addressing a ceremony to celebrate the 11th anniversary of the National Day of Nuclear Technology held in Iran International Conference Centre in Tehran, President Rouhani noted that the Iranian nation, who, for years, in practice and with their resistance, shouted the slogan of “Nuclear energy is our absolute right” patiently, was chanting the right slogan and endeavouring to achieve a high aspiration all these years.

This is a great skill to make the world powers in Lausanne, Geneva, Vienna and New York hear the slogan chanted in Iran’s streets and convince them to agree to the Iranian nation’s legitimate demand by drafting and approving an international bill which has very precise technological, diplomatic and legal dimensions, he added.

“Although it is very important that an entire nation demands having nuclear energy as its absolute right, besides people’s presence, will and quote, these are a country’s experts who should put the slogan into practice technically. Our lawyers and diplomats are the ones who should defend this absolute right in the national and international communities.”

Iranian organizations, gallant youths and experts have completed 42 important nuclear projects over the course of 12 months to prove it to the nation and the world that nuclear energy is being used peacefully in different sectors of the country and numerous aspects of the Iranians’ life, he went on to say.

“Efforts were underway by some countries to deprive Iran from the right to develop nuclear technology. However, currently, Iran is a member of the International Atomic Energy Agency’s Expert Group on Multilateral Approaches to the Nuclear Fuel Cycle (MNA) and has officially joined the group of countries with the uranium enrichment technology.”

President Rouhani said the world has acknowledged that Iran has indigenized the nuclear technology.