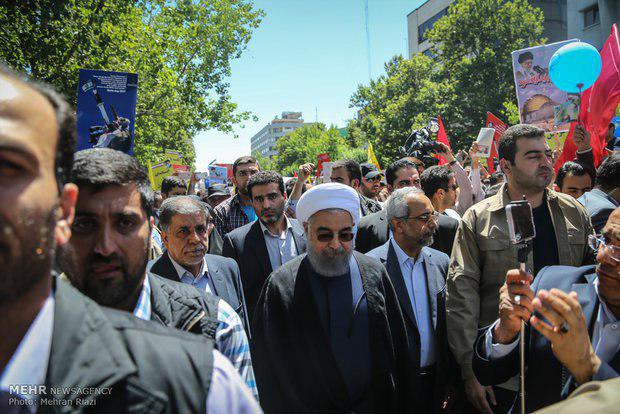 An Iranian newspaper says those who chanted insulting slogans against President Hassan Rouhani are notorious people.

The Jomhouri Eslami newspaper has, in a Farsi article, taken a swipe at the few individuals who chanted slogans against the Iranian president during the International Quds Day rallies on Friday. The following are highlights of the analytical piece:

If the Islamic establishment takes hundreds of firm steps toward stability and progress, just one uncalculated comment or stance by officials can undermine those steps.

Diversity of opinions by policy makers in the country has been an annoying problem in recent years, and it has, unfortunately, been on the rise. The diversity of opinions reached its highest point after the results of the election were announced, so much so that if one wants to list examples of it, one would come up with a long list.

This diversity of opinions among individuals who can contact and meet each other every day and in any place is really strange. Why are the country’s key issues as well as national security affairs, which are not factional in any nation, brought up in the public, local and foreign media and Friday prayers forums rather than being discussed in relevant bodies?

Is it logical and rational to raise a lot of ballyhoo over marginal issues pertaining to the legitimacy of the system, especially after 40 years? It goes without saying that the politics-ridden atmosphere in the country will turn it into a complicated problem and it will become a hot topic in Friday Prayers sermons and will also be discussed by people and institutions that are religious and believe in Islam and have no doubt about the honesty and goodwill of the person who has made the remarks which turned into a pretext for kicking up a fuss. So, why are they continuing to create brouhaha over the issue?

It seems this unpleasant climate has its roots in the outcome of the presidential election and long-running refusal by the opponents of Mr. Rouhani to accept a result the opposite of which everyone was trying to achieve.

But the reality is that people’s decision was against the opponents’ desire and expectation. But why did they make every effort to undermine the results of the election and even seek to pit officials against one another? Wouldn’t that please the enemies of the Revolution? This comes at a time when the enemy has tried to cash in on the contradictory positions and statements of Iranian authorities and institutions to weaken the strategic effects of Iran’s successful missile attack on the positions of ISIS in Syria.

It seems we are very good at downplaying the country’s great victories and aggrandizing little mistakes and errors! Moreover, some individuals would like to perpetuate tension and divisions and wouldn’t like to see tranquility return to the country’s political arena.

The positions adopted by some people over the past few days in the holy month of Ramadan are likely to dash all hope for the amelioration of the situation. But we wish something would be done about it.

We saw some people, in an organized move, chant slogans against President Hassan Rouhani during the International Quds Day rallies. That reminds one of similar scenes during the time when late Akbar Hashemi Rafsanjani was alive.

The individuals behind this are notorious people and can be prosecuted. May God Almighty guide these people, whose actions will come back to haunt them at last. Among the slogans changed was one which compared President Rouhani with Abulhassan Banisadr who was Iran’s president in the early years after the 1979 Islamic Revolution and who was removed from office for treason.